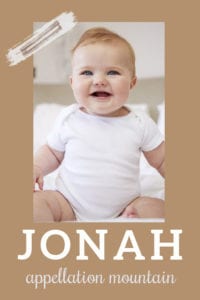 Biblical baby name Jonah brings to mind whales, but there’s so much more to this appealing choice.

The baby name Jonah brings to mind a faithful soul, holding a candle inside the cavernous interior of a whale.

Because Jonah’s story is far more complicated. He has been aboard a ship, caught in a terrific storm. To appease an angry God, the sailors tossed him overboard.

What’s more, he deserved it. Jonah had boarded the ship to flee a commandment from God, and the storm was a punishment. After his dunking and three days’ journey in the belly of something ocean-going, he agreed to follow God’s directions. (For a while, anyhow.)

There’s a raging etymological and even zoological debate about Jonah’s whale. Some translations tell us that a “giant fish” or even a “sea monster” did the swallowing.

As for his given name, it comes the Hebrew Yonah, meaning dove or pigeon. It became Ionas in Greek, later evolved to Jonas and eventually lost the -s sound again. At least in some languages. Jonas remains the name of choice in German, Swedish, Norwegian, and plenty of other European languages.

The baby name Jonah feels something like Noah – richly symbolic, religiously significant, and yet broadly known beyond church doors.

The Biblical story has long been popular, especially in the Middle Ages. For that reasons, sailors considered the name unlucky.

In fact, the phrase “Davy Jones’ locker” may have evolved from the phrase “devil Jonah” or “duffy Jonah.” It means, of course, death and burial at sea.

Then again, there are other explanations for the phrase Davy Jones.

But it’s enough that even now you can find the baby name Jonah on lists of unlucky names.

While that seems like a superstition best left in the past, it does explain one thing: why this name was so little used in the US.

It barely ranked in the US Top 1000 in the late nineteenth century. The baby name Jonah appeared just a few times in the early 1900s, leaving the rankings entirely after 1911.

In 1969, a movie called 80 Steps to Jonah starred a young Wayne Newton as a criminal on the run. He hides out in a school for the blind. Newton also recorded the theme song, called both “My World” and “Jonah’s Theme.”

Then a year passed. And 1993, of course, marks the year that Sleepless in Seattle hit the big screen. The smash hit romance starred Tom Hanks and Meg Ryan, who fell in love thanks to the machinations of the adorable eight year-old son of Hanks’ character.

The son’s name? Jonah, of course.

Of course Biblical boy names ending with a were starting their tremendous run. Noah, Elijah and Isaiah all appeared in the US Top 100 by 1996, and every one of them was on the upswing.

Along the way, notable Jonahs appeared.

There were some before the twenty-first century, of course. Jonah Sanford – senior and junior – were elected officials from New York state in the 1800s. Jazz trumpeter Jonah Jones – born Robert – is one, known for his work from the 1930s well into the 1970s.

Add in athletes and other figures and the list becomes considerable.

But the best known bearer of the baby name Jonah right now? Almost certainly actor and comedian Jonah Hill, known for his roles in Knocked Up, Superbad, and Get Him to the Greek, as well as Oscar-nominated dramatic roles in Moneyball and The Wolf of Wall Street.

All of this has brought the baby name Jonah straight into the mainstream. It’s not nearly as common as Noah – or other Biblical boy names ending with -a and -ah. But it fits in nicely with so many J names for boys, from Joseph to Joshua.

What do you think of the baby name Jonah?

Originally published on March 4, 2019, this post was revised substantially and re-posted on January 9, 2021. 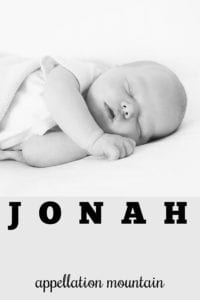