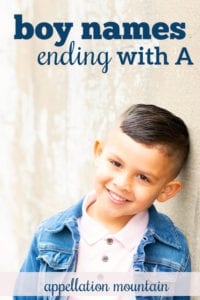 Boy names ending with a seem like the exception, right? Girls’ names end with a, while boys’ names … well, they probably end with n or r. Some consonant.

For every Ryan, there’s an Ellen.

In English, no combination of letters or sounds defines a name’s perceived gender. We rely on usage. And usage changes over time. Kate is a girl, Nate is a boy, and Tate? Probably a boy, but you’ll have to ask.

By the end of the 1970s, a-ending boy name Joshua had entered the US Top Ten. The Old Testament choice fit with David and John, but had a softer sound. After an age with names like Robert and Steven at the top of the charts, Joshua ushered in a new era.

BIBLICAL BOY NAMES ENDING WITH A

An Old Testament king, and a name meaning doctor.  In our mini name era, Asa could wear well.

One of the few New Testament names on this list, Aquila comes from the Latin word for eagle.

An ancient prophet, and a very popular name for modern boys.

Elisa follows Elijah in the Old Testament. It could be a hit, but the similarity between Elisha and 80s favorite Alicia may give parents pause.

Biblical and literary, thanks to Ezra Pound and Ezra Jack Keats.

Another Old Testament king, with stylish nicknames Kai and Zeke.

One of the most obscure Old Testament options on this list, Hosea does have a great meaning: salvation.

A Hebrew name meaning watchful, Ira fell out of favor for many years. But now, with Max and Asa so stylish, Ira might be ready for revival.

Another Old Testament prophet and Top 100 name since 1996.

Okay, there’s no Jebediah in the Bible. It’s a mash-up of nickname Jeb and Jedidiah. But it fits with the Old Testament style.

One of several boy names ending with a currently rising in the popularity charts.

Jeremiah was a bullfrog, or so says the 1971 hit “Joy to the World” from Three Dog Night. It became Jeremy in English, and in recent memory, Jeremy was the more popular form. But thanks to our love of boy names ending with a, Jeremiah is back on top.

This name means dove, but the prophet was swallowed by a fish. Jonah followed Joshua, Noah and other a-enders up the charts.

A former #1 name, Joshua paved the way for boy names ending with a.

A former king of Judah, and a current Top 100 choice in the US.

Jacob’s son, Judah lent his name to a tribe, and eventually a kingdom. Short form Jude appears in the Old Testament, plus brings to mind The Beatles’ hit and Hollywood A-lister Jude Law.

Another minor prophet, and a name every bit as wearable as Hezekiah or Nehemiah.

This Old Testament figure lent his name to Charles Dickens’ villainous Uriah Heep. Dickens’ character, in turn, inspired the 1970s band to adopt it as their name.

Zachary had a good run, but the Old Testament Zachariah fits in best with a-ending boy names.

A cousin to Zachariah, but leading to the nickname Zeke instead of Zach.

Another Old Testament king, with a name that we might’ve invented if it didn’t already exist.

BOY NAMES ENDING WITH A FROM THE MAP

Sometimes heard for girls, but with potential for boys, too.

It’s the name of a Sioux people, as well as two US states – North and South Dakota. It’s slightly more popular for boys, but used in big numbers for girls, too, especially in the late 1990s. And, as the name of a Native American tribe, this name may be controversial in some circles.

With the adventurous Dr. Indiana Jones answering to this name, it is easy to imagine this place name for a son. Hat not required.

The name of an African nation, Kenya rose in use in the 1960s. It’s more popular for girls, but seems fitting for a son, too.

Like Kenya and Arizona, it’s use more for girls, but feels very accessible for a son, too.

As in Japanese filmmaker Kurosawa, he of such screen classics as Seven Samurai. It means bright, and sounds fierce.

The Arabic form of Jesus. It’s also spelled Issa, Essa, and Eissa – the latter is the form Janet Jackson chose for her son in 2017.

It’s not exactly an import. Koa means warrior in Hawaiian. Could it be the next Kai?

The Italian form of Luke, Luca sits just outside the current Top 100.

The Arabic form of Moses.

It leans feminine in the US, but it’s masculine in Italy and several Slavic languages. The fame of inventor Nikola Tesla raises the name’s profile just slightly for boys.

It’s masculine in Moscow, the go-to Russian nickname for Alexander. In the US, it feels feminine, but a handful of high profile figures, from athletes to celebrity kids, make this one feel more unisex as a-ending boy names catch on.

CS Lewis used this name for a male character in The Horse and His Boy. The Shasta daisy makes it feel feminine. Like Dakota, it’s the originally name of a Native American tribe, so tread carefully.

From a Hebrew name meaning gift, Shia makes this name thanks to actor Shia LaBoeuf.

MORE BOY NAMES ENDING WITH A

Originally a surname for someone of Danish ancestry, Dana started out on Team Blue. Then it caught on for girls, peaking in the 1970s and 80s. Give it a few more years, and Dana might follow Luca and Koa right up the popularity charts.

We love a good surname name, so how ’bout Garcia?

It’s heavily used for girls, but McKenna sounds like a potentially unisex choice.

Tree names succeed for boys and girls alike. Besides, Sequoia is so much more. In the early 1800s, Sequoia, a leader of the Cherokee nation, created the first writing system for his native tongue.

What are your favorite boy names ending with a? What should I add to this list? 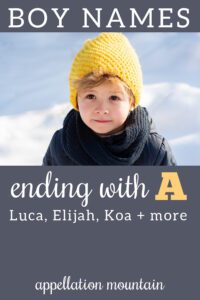