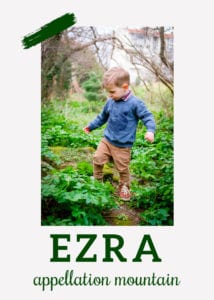 Turn on the radio in the spring of 1995 and you couldn’t avoid hearing this song:

The song was called Good, and the artists were a previously little-known group formed back at Louisiana State University. Known as Better Than Ezra, their success quietly pushed the name back into the spotlight.

As for where the band found the name? They’ve never said. But there’s no shortage of possibilities.

The name appears in the Old Testament. He’s a poet and a scribe, a teacher and interpreter of Jewish law.

The name’s Biblical status explains why it’s remained in use over the ages.

An early president of Yale University wore the name, as did the founder of Cornell University.

It’s the first name of Fitch in Abercrombie & Fitch, too. Before the store peddled goods in shopping malls, it outfitted gentlemen adventurers.

But this name doesn’t seem scholarly or rugged. Instead, the baby name Ezra leans literary. That’s thanks to two other figures.

Born in the wilds of Idaho when it was still just a territory, poet Ezra Pound spent much of his adult life in Europe. His poetry endures, though his political views – he supported Italy’s fascist regime during World War II – ensure that he’s forever controversial.

A literary pedigree and an unusual sound – the razor-sharp z-r, the -a ending – put the baby name Ezra on the quirky classics list for years.

But as those children of the 90s started families of their own, the baby name Ezra continued to climb.

There’s well-known journalist Klein, one of the founders of the news site Vox.

Actor Ezra Miller has become a household name, thanks to turns in the Fantastic Beasts franchise and his role as The Flash in the DC Comics universe.

Sound pushed this name higher, too. We’re all about a-ending boy names, with Noah a recent Top Ten choice, and other names like Luca and Isaiah very much in favor. That high-value Scrabble letter Z helps, too.

But there’s one other factor to consider.

Disney’s animated series Star Wars Rebels takes place before A New Hope – the first Star Wars movie ever made – but after Revenge of the Sith. In the series, Ezra Bridger grows up an orphan. But he’s Force-sensitive – that is, a potential Jedi. He eventually joins up with a band of rebels as the Empire tightens its hold. Bridger proves himself a capable leader, though he struggles to use his power for good.

He’s a popular character, and the series has been a success. It first aired in 2014.

Many names, from Biblical picks like Micah and Asa, to modern favorites like Jordan and Drew, have some history of use as unisex names across languages and cultures. That’s not the case for Ezra. Ezra as a girls’ name is new – though Ezra’s overall popularity is relatively new, too.

Given the overwhelming number of boys receiving the name, Ezra feels a little like Ryan or James for a girl – more of an exception, not a trend.

The Arabic feminine name Isra sounds similar, but has separate roots. And a female character on Star Trek: Deep Space Nine was named Ezri, which is a variant of Ezra, so that might also have some influence.

Really, the only question remaining is how high will the baby name Ezra climb?

What do you think of the baby name Ezra? Would you consider this name for a son?