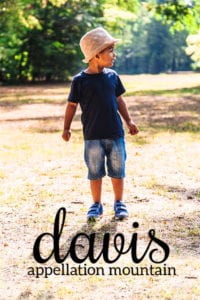 Davis updates the classic David, taking the Biblical boy name in a modern, even jazzy direction.

We’re wild about surnames these days.

Of course, we’ve used some surnames for ages. But they used to be borrowed from our family trees. Or maybe personal heroes – Kennedy spiked in 1960/61 around the time of JFK’s election. Cleveland reached the US Top 100 in 1884/85, thanks to Grover.

But names like Mason, Jackson, and Hunter used simply because they’re current? That feels different. They appeal because they’re broadly familiar, easy to spell, and yet still fresh and new compared to the names we’ve loved for so many generations.

Davis benefits from this trend, and the ‘s’ ending seems to be on the upswing lately.

It helps, too, that Davis updates such a rock solid classic of a name.

Surname forms like Davies, Davids, and Davidson all evolved from David. After all, David reigns as one of the great Old Testament kings, a director ancestor of Jesus.

David makes the US Top 50 every year since data was first recorded for 1880; from the late 1930s into the early 1990s, it routinely appeared in the US Top Ten. Odds are that you know a few Davids. And the meaning – beloved – feels like a bonus.

Jazz legend Miles Davis takes this name in a musical direction. One of the most accomplished jazz trumpeters of all time, his remarkable career spanned more than five decades. His 1959 recording Kind of Blue remains the best-selling jazz album of all-time. A bandleader and composer as well as a trumpeter, nearly every jazz innovation in the twentieth century shows his fingerprints.

No question that the musician behind Birth of the Cool boosted both his first and last names.

Of course, as surnames go, Davis is widely heard.

There’s a University of California campus with the name, just west of Sacramento. Since 1900, countries have competed to win the Davis Cup in tennis. Both Smallville and One Tree Hill used the name for characters. On a problematic note, it’s also the surname of the president of the Confederacy during the US Civil War.

None of these images supplants the jazz legend, but some of them might appeal to your family.

For generations, Davis ranked in the US Top 1000, probably thanks to the practice of handing down family surnames as firsts.

But until recently, the name remained uncommon – typically above the #500 mark.

One factor that could boost the name again: we’re wild about ‘s’ enders, especially surnames ending with s. Just ask Brooks and Hayes.

If you love your boy names classic, but still stylish, and if you’re eager to find something outside of the mainstream? Davis is that just slightly different name you’ve been waiting for. 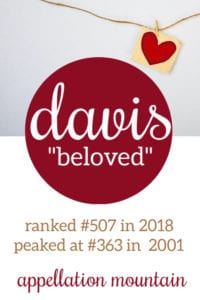