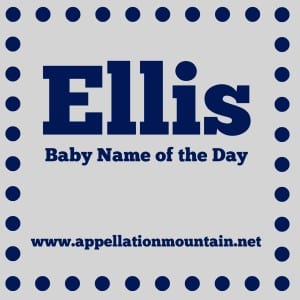 He’s a stylish surname name, with great meanings and an on-trend sound.

Thanks to Emily for suggesting Ellis as our Baby Name of the Day.

Ellis immediately strikes me as literary, but it’s not quite like naming your kiddo Hemingway or Hawthorne.  My first thought is the far more contemporary Bret Easton Ellis, the author of Less than Zero and American Psycho.  Though there’s also Ralph Ellison, the author of The Invisible Man, as well as Beat poet Royston Ellis.

Perry Ellis – yes, that’s his real name – lends him a preppy, tailored vibe.  In the 1970s and 80s, his fashion house was responsible for updating menswear.  Today the brand still proclaims “levity … is our legacy,” and noted that Perry believed that clothes should be fun.

Possible origins for the name include:

Then there’s the island through which over 12 million future Americans entered the US.  Samuel Ellis bought the land back during the American Revolution.  Eventually it became home to Fort Gibson.  In 1890, Congress appropriated funds to convert the fort into an immigration station.

But what about Ellis as a given name?

Some of that credit could go to HBO’s The Wire, and fictional police lieutenant Ellis Carver.

El- names are on the rise for boys – think of Eli, Elias, and Elliot.  And ends-with-s picks like Miles and Silas are in vogue.  But this name is rising quickly for girls, too.  Blame Alice and Ellie.  The name was given to 399 boys and 216 girls in 2012.

Overall, Ellis remains a possibility for parents after a vintage gem for boys.  He’s relatively underused, and with his creative credentials and appealing meanings, Ellis could be the perfect name for a son.