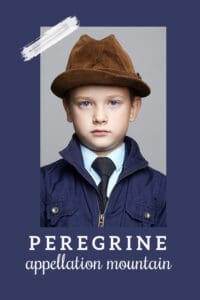 The baby name Peregrine belongs to a bird of prey and a man of prayer, but the overall image is a well-traveled gentleman.

The baby name Peregrine comes from the Late Latin Peregrinus.

Dig a little deeper, and you’ll discover that peregre originally referred to outside the Roman world, from ager – land – and per – across or beyond. It suggests a foreigner, or maybe a stranger.

In fact, in the early Roman Empire, a peregrinus was a freeman and a provincial subject, but not a citizen of Rome.

The peregrine falcon is found virtually everywhere on Earth, save for the extreme Arctic, the rain forests and the highest mountains.

It’s a smooth name for a bird of prey, given because of their wide range of habitats.

Easily trained, they’ve been popular in falconry for thousands of years. Many cultures have associated the birds with royalty, including Ancient Egypt. More recently, the birds are found near urban settings, and the peregrine falcon is the official city bird of Chicago.

Speaking of wanderers, JRR Tolkien’s Lord of the Rings trilogy sent a Hobbit ranging across much of Middle Earth on a quest. Frodo was accompanied by two friends: Merry and Pippin.

Where did Tolkien find the name?

There’s a long history of the first name Peregrine across the centuries.

Emperor Commodus sent the first Saint Peregrine to his death sometime in the late 100s. Believe it or not, his relics now reside in St. John’s Abbey in Minnesota.

In the late 200s, another Peregrine set out for Gaul, converted the locals to Christianity and built a cathedral in Auxerre, before meeting his fate during the Diocletian persecutions.

The sixth century Italian bishop Saint Cetteus is also known as Peregrinus. That’s because Cetteus was executed by warring factions in his city. They threw his body off a bridge, and it floated to Pescara, Italy. Fishermen discovered him, and called him Peregrino – traveler. They eventually learned his real name, and the Cathedral of Saint Cetteo stands in Pescara today.

The thirteenth century Saint Peregrine Laziosi gave up his wild youthful ways following a vision, became a monk, and is now considered the patron saint for cancer and AIDS patients.

The ancient world also gives us first century philosopher Peregrinus Proteus, who was raised a Christian but ended his life a Cynic.

By the sixteenth century, the baby name Peregrine was in use amongst English aristocrats.

One possible reason: it’s tempting to tie the name’s revival to the 1486 publication of the wildly popular Book of St. Albans, which included an essay on the ancient sport of falconry. (That’s hunting using a trained raptor to bring down your prey.)

At least a dozen titled or well-born Peregrines appear in the historical record from 1550 through the present day. The 12th Duke of Devonshire is named Peregrine Andrew Morny Cavendish.

In 1620, Peregrine White became the first English child born in the New World.

His parents, Pilgrims William and Susanna White, named their firstborn Resolved, so it seems likely that they understood how very appropriate a choice they made. Peregrine was actually born aboard the Mayflower while it was harbored in Provincetown. (His story is told in the Pilgrim Hall Museum in Plymouth, Massachusetts.)

However, the boy’s name Peregrine has never registered in the US Top 1000 names, at least dating back to 1880, the first year for which data is available.

Fast forward to the twentieth century.

That’s right – Peregrine is, at least sometimes, used as a girl’s name.

Not only has the baby name Peregrine never appeared in the US Top 1000, but it was given to fewer than five boys (or five girls) for most years during the twentieth century. It debuted in the US popularity charts in 1998, the first year the name was given to five boys.

Peregrin, without the final E, didn’t reach that milestone until 2011.

That makes this name quite rare, indeed.

And yet, the baby name Peregrine comes with rich nickname options. There’s the obvious Perry, which is actually a Welsh form of Henry; Pip and Pippin, likely borrowed from Philip. Pepin has roots as an independent name, but it might also work with Peregrine. After all, Pepin is sometimes a nickname for forms of Giuseppe, too. It could make this rather grand name more wearable.

It all makes Peregrine a study in contrasts. The name’s meaning suggests a world traveler. But it’s status as an old school antique takes it back in time. Peregrine departs for his journeys dressed in a suit, with well-made leather trunks holding his essential gear.

Still, this is the age of Sebastian and Julian. And River and Bear. Peregrine sounds less surprising than it might’ve have in the 1980s – or even the early 2000s.

As of 2021, 21 boys and 9 girls received the baby name Peregrine. That makes this rare, but still on the right side of known.

Would you consider the baby name Peregrine?

Originally published on March 14, 2009, this post was substantially revised and re-posted on October 5, 2022. 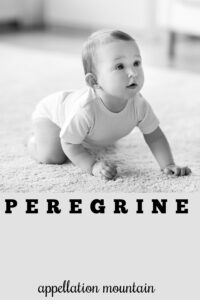 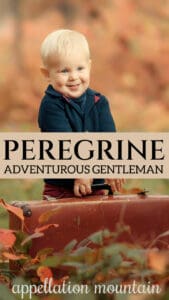