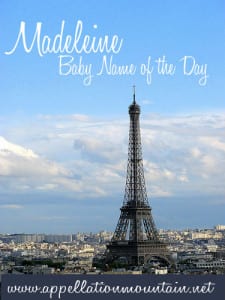 She’s an ancient appellation softened over the years, a quintessentially French choice.

Thanks to Kristin for suggesting Madeleine as our Baby Name of the Day.

I’d long assumed that the famous children’s book series by Ludwig Bemelmans was called Madeleine.  It takes place in Paris, after all!

But no.  Bemelmans’ iconic French schoolgirl was just plain Madeline.  The series debuted in 1939.  Her name may have been inspired by Mrs. Bemelmans, known as Mimi, but born Madeleine.

More on spelling in a minute.

First, let’s talk about the name’s origin, Mary of Magdala – Mary Magdalene.  She appears in the New Testament, a faithful follower of Jesus, by his side for the crucifixion and the resurrection.  Somehow she was wrongly classified as a prostitute in the early Middle Ages.  She’s no Jezebel, but there’s a hint of scandal around her still.

Magdala was a village of the Sea of Galilee.  There are two possible origins for the place name: first, the Hebrew word migdal, tower.  Second, in Aramaic it might mean great place – which isn’t so different.

Magdalen, Magdalene and Magdalena endured as given names likely because of the saint, whatever her perceived shortcomings.  But her pronunciation changed dramatically.  By Chaucer’s time, it was still spelled with a g, but pronounced like our word maudlin.  In 1542, Cambridge’s Magdalene College was dedicated.  Some records spell it Maudelyn, reflecting the preferred pronunciation.

When does she first lose her g sound?  I can’t pin it down, but by the fourteenth century, maudlin meant sorrowful, because Mary Magdalene was often depicted weeping.

It doesn’t appear to have been a common name in the Middle Ages, but she’s not unknown.  In Italian, she’s Maddalena, Madlenka in Czech, and Madeleine was a French favorite in the 1920s.  Madelon is heard in Dutch and French.  Coincidentally, the German word for girl is mädchen, and a regional variant is mädel.  Folk etymology sometimes links mädel to the name.

A French sponge cake is called a madeleine, possibly named after a French baker from the 1800s.  They feature prominently in Marcel Proust’s In Search of Lost Time.  The cakes evoke memories, shading Madeleine with yet more meaning.

Madeline has long been the more popular spelling in the US.  Her rise to prominence began in the mid-1980s.

And, of course, the children’s books.

By 1994, Madeline was in the US Top 100.  If you took your cue from Bemelmans, Madeline rhymed with line – literally: In an old house in Paris, that was covered with vines, lived twelve little girls in two straight lines … the smallest one was Madeline.

Taking a cue from Caroline/Carolyn, some parents opted for Madelyn.  Today she’s the most popular of the spellings, standing at #79, a few paces ahead of Madeline at #85.  The -lyn ending eclipsed -line in 2009.  Madilyn, reminiscent of Marilyn, comes in at #301.  And then there’s Madeleine, ranked #319 in 2011.

Four more spellings chart in the US Top 1000, and there are many more in use.

But Madeleine’s relatively rarity isn’t a problem.  It is recognized by many as French, and in our age of Genevieve and Vivienne, that’s a powerfully stylish group.

If sharing the nickname Maddie gives you pause, other options abound: Minnie or Molly, as Kristin suggested.  There’s also Mimi, Lena or even Lainey, depending on your pronunciation and spelling choices.  (I’d be tempted to use Madelaine to get to Lainey.)

Overall, she’s not a novel choice, but she is an enduring and elegant possibility.