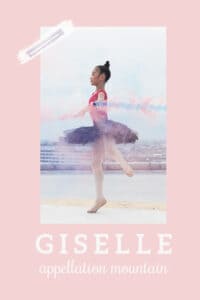 The baby name Giselle combines French style with Disney princess bona fides – and yet, it remains just a little outside of the mainstream.

The baby name Giselle sounds French – and it is!

But it originally comes from the Germanic word gisil – pledge.

That sounds like a virtue name, along the lines of Promise.

Instead, it refers to the medieval practice of sending well-born children to be raised at a foreign court for political reasons. It’s not quite like being a hostage; in fact, pledges were often treated as honored guests. A marriage might guarantee an alliance during the Middle Ages, but if that wasn’t possible, this was an alternative means of creating a mutual obligation.

Sometimes a poetic meaning of Giselle, like “pledge of peace” is given. That’s not wrong, but it’s not the full picture, either.

History gives us several women by the name during the early Middle Ages.

Pepin the Short, King of the Franks, named his daughter Gisela in the eighth century. She became an abbess; her brother, Charlemagne, inherited his father’s kingdom, expanded his reach, and became known as the “Father of Europe.” He, too, named a daughter Gisela.

Some accounts say that Viking ruler Rollo married the daughter of the French King Charles III during the 900s. (Back then, the kingdom wasn’t France, but West Francia.) When History’s Vikings told her story, they called her Gisla. Other reports refer to her as Gisela. Rollo would become the first Duke of Normandy.

King Conrad I of Burgundy named his daughter Gisela around the year 955. She, in turn, married the Duke of Bavaria. Their daughter, also named Gisela, married King Stephen I of Hungary. She’s been beatified by the Catholic church for her role in bringing Christianity to that part of Europe.

Speaking of Europe, so many aristocratic women wore the name that it’s not surprising it spread throughout the continent.

The French typically spell it Gisèle, and pronounce it with a soft g.

Spanish spells it the same way, but pronounces it more like kee SAY lah.

It’s spelled with a Z in Hungarian.

Nicknames, including Gizi, Gisa, Gilly, and Gigi are heard, too.

The baby name Giselle owes its popularity – and the double L spelling – of more recent years to Adolphe Adam’s ballet.

He composed the 1841 ballet Giselle based on a Heinrich Heine poem from only a few years earlier.

The story goes like this: a young peasant girl falls for Albrecht, a nobleman disguised as a peasant. They dance and flirt; but then his deception is revealed. Not only is he the Duke of Silesia, he’s engaged.

A heartbroken Giselle dances herself to death.

Then out come the Wilis. They’re young women who have perished before their weddings, and they’re out for vengeance over Albrecht’s deception.

The Willis summon Giselle from her grave, and they nearly succeed in dancing Albrecht to death. Her former suitor survives only because Giselle’s selfless love remains. He lives, and she goes on to rest in peace.

Renowned Soviet dancer Mikhail Baryshnikov famously danced the role of Albrecht. They even turned his performance into a 1987 movie, Dancers. The flick flopped, but didn’t hurt the name. Giselle had been gently rising from the late 1970s onward, and it continued to gain in use modestly.

Similar sounding names like Michelle and Danielle topped the charts during the decade. Others, like Noelle, Chantel/Chantelle, and Ariel/Arielle, were also gaining in use.

More -elle and -ella names would rise, too, like Gabrielle and Isabelle.

Gisele Bündchen rose to fame in 1999, appearing on the cover of Vogue three times that year. From there, Bündchen graduated to legendary status, becoming one of the most famous faces in the world.

She also launched several business ventures, from sandals to skincare, and authoring a New York Times bestseller, titled Lessons: My Path to a Meaningful Life in 2018. When the Olympics came to Rio de Janeiro in 2016, she appeared in the opening ceremonies.

Lately, Bündchen is every bit as famous for her marriage to – and divorce from – NFL star quarterback Tom Brady.

Then came Enchanted, a live action-animation match-up starring Amy Adams as a fairytale princess who finds herself in gritty New York City. There’s still a prince, and a happily ever after. And Patrick Dempsey. The movie debuted in 2007.

Disney+ will released Disenchanted, the sequel, in November 2022.

Despite the supermodel, Gisele ranked in the US for just a few brief years in the 1950s. Gisela has never appeared on the charts.

That’s not rare, but it’s also far from common.

Graceful and romantic, the baby name Giselle combines a certain feminine strength with a stands-out/fits-in style. It could be the perfect choice for parents seeking something just slightly different.

What do you think of the baby name Giselle? 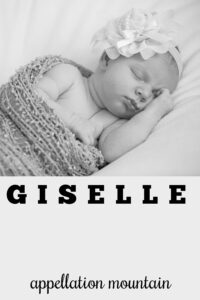 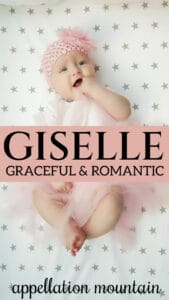