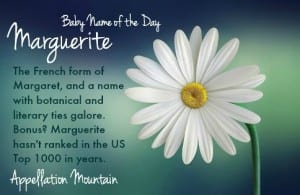 It’s a name that I can’t stop recommending.

Our Baby Name of the Day is Marguerite.

Maybe it’s not fair to call such an enduring classic back, because Margaret has been in use for ages. There was a popular fourth century saint, as well as royals galore.

But the numbers don’t lie. Margaret ranked #169 in 2014, up from #180 the year before. That’s a far cry from the name’s heyday, when Margaret ranked in the US Top Ten from 1880 through 1939.Marguerite is the French form of the name. The similar Margriet is Dutch, and Margarete is heard in German.

But Marguerite isn’t just the French form of Margaret.

In Greek, margarites is the word for pearl, ultimately from an older Sanskrit or Persian word. In Latin, it becam e the given name Margarita, which remains in use in Spanish and Russian.

French writer Jean Molinet and Oxford-eductaed monk and poet John Lydgate connected pearls and daisies in their works. The accomplished Marguerite de Navarre, sister to future French king Francis I was a skilled diplomat, a friend to Erasmus and da Vinci. She used the daisy as her personal symbol. So did Margaret of Anjou, wife of King Henry VI of England.

And so eventually the French word for daisy became marguerite, and Daisy became a playful nickname option for Margaret.

It’s not just in French, either. During World War II, Queen Wilhelmina of the Netherlands took refuge in Canada. The daisy became the symbol of Dutch refugees, and when the queen’s daughter, Crown Princess Juliana, gave birth to a daughter in Ottawa in 1943, the princess was named Margriet.

But there have been notable uses of the name, and they’re a powerful and creative bunch:

A point of trivia: in Drew Barrymore’s Cinderella-esque 1998 movie Ever After, the wicked stepsisters were named Jacqueline and Marguerite. 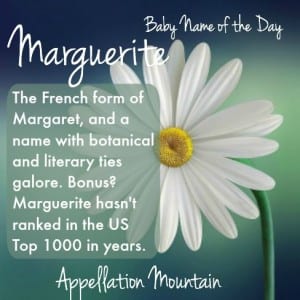 The name is one-part Genevieve and one-part Josephine, but rarer than both put together.

Given our enduring affection for French names, and a growing appreciation for the classic Margaret, it’s easy to imagine Marguerite fitting right on a playground today.

From Maggie to Daisy to Gigi, there are dozens of potential nicknames if you prefer to shorten your daughter’s name. But at three syllables, Marguerite doesn’t require a nickname, either.

If you’re after a name that feels rare and classic at once, this is a name to consider.

What do you think of Marguerite? Do you prefer Marguerite or Margaret?