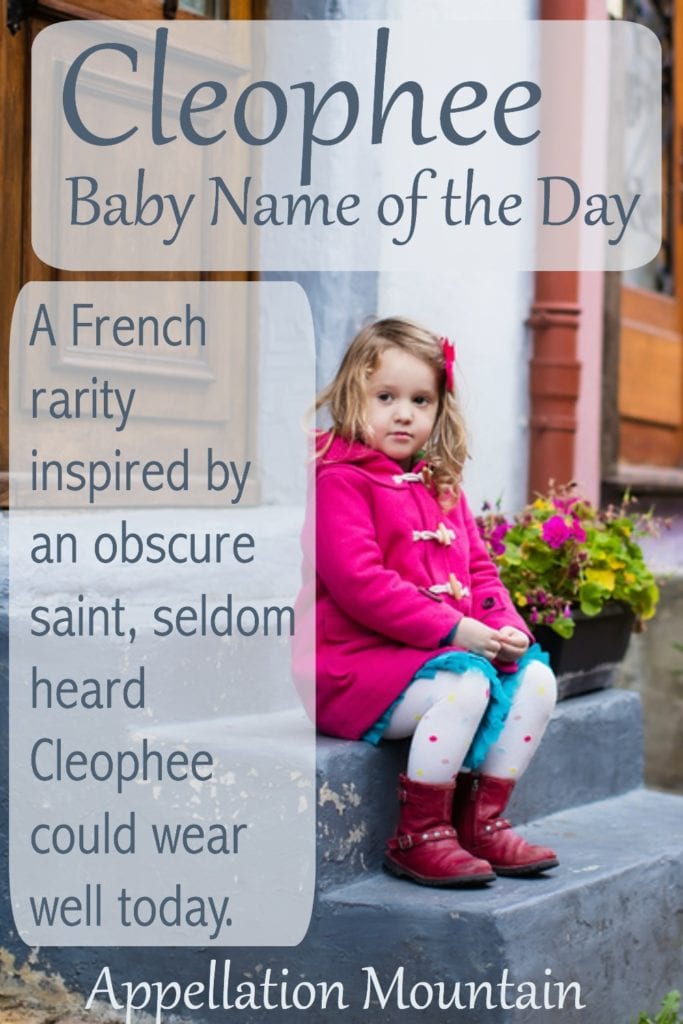 Ancient Cleo reigned as a Top 200 favorite in the early twentieth century. But Cleophee never made an impact in the US.

Today’s Baby Name of the Day was inspired by a conversation with the marvelous Duana Taha, author of The Name Therapist.

Clopas merits a brief mention in the New Testament. He missed the crucifixion, but his wife attended. She’s among the many Marys of her day, also known as Mary of Clopas, or Mary of Cleopas.

Near the cross of Jesus stood his mother, his mother’s sister, Mary the wife of Clopas, and Mary Magdalene.

Scholars debate her exact identity. Could she be Clopas’ daughter rather than wife? A relative of Jesus?

In France, Saintes-Maries-de-la-Mer preserves an interesting twist to the legend. Local custom holds that the three Marys – Clopas, Salome, and Magdalene – journeyed from the Holy Land to France. The church there holds their relics, discovered in the 1400s.

It’s no surprise, then, that Cleophee evolved in France.

Clopas became Cleopas and Cleophas, and the -phas ending evolved into -phee for women.

In Latin, the Mary from the crucifixion is sometimes called Maria Cleophae.

By now, you might be scratching your head over pronunciation. I’d heard that it sounded more like Cleo FAE in French. If you include the diacritical marks, it is properly spelled Cléophée. But most pronunciations I found in a recent search opted for Cleo FEE.

In the age of Chloe and Penelope, the FEE ending makes a more intuitive choice for American English speakers.

In Italian, the name became Maria Cleofe, and sometimes Cleofa or Cleopa.

A handful of women bear the name. In the early 1400s, Cleofa Malatesta da Pesaro married the Orthodox ruler of Morea. Several women from the Western Christian tradition were wed to Eastern Orthodox princes to create alliances against the Ottoman Turks.

Did the discovery of the relics inspire her name? Maybe, except a date for the relics’ discovery remains elusive.

The name has enjoyed some use in Spanish, too. I found an Argentine botanist named Cleofé Calderón. During the 1970s, she discovered a new genus of grasses, named Calederonella in her honor.

Kleopha served as an abbess at an influential convent in Ulm, Germany during the seventeenth century.

But mostly this name occurs in France, in very small numbers. Meilleurs Prenoms suggests that the name is rising in France today. And yet, those numbers remain very small. They record fewer than 100 births in 2013, the peak year of usage.

In the US, there have never been even five girls given the name in a single year. I did find a smattering of related names:

Still, most forms do not chart in the extended Social Security data set. Count the entire family among the barely known.

And yet, this name embodies a fascinating tale of faith and legend. It’s an intriguing possibility for parents seeking some rare but real. It fits in with Penelope and friends, and shortens to the vintage, upbeat Cleo. If you love rarities, Cleophee might belong on your list.