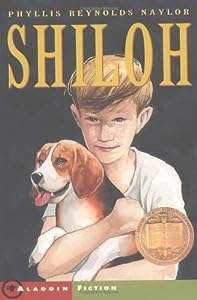 She was a surprising starbaby choice back in 2006, previously worn by a battle, a dog, and a Neil Diamond song.

Our Baby Name of the Day is Shiloh.

In the Old Testament, Shiloh is a place, older than Jerusalem.  It may come from the Hebrew shalo – peaceful.  But Shiloh is also sometimes considered another name for Jesus or Mohammed, thanks to this line from Genesis: “The scepter shall not depart from Judah, nor a lawgiver from between his feet, until Shiloh comes, and unto him the gathering of people be.”

Shiloh could be related to shaluach – messenger.  The Vulgate edition of the Bible translates Shiloh as “he who is to be sent.”  Or there could be some epic mistranslation involved.

All of this makes Shiloh either very religious – perhaps too much to be used as a given name – or an openly spiritual choice embraced by many parents, a cousin to Nevaeh and Genesis.

More recent events give us some pretty strong associations with the name, too.

I counted nearly two dozen places in the US called Shiloh.  The most famous has to be in southwestern Tennessee, the site of the American Civil War Battle of Shiloh in April 1862.  The Confederacy had the upper hand early, but Union forces ultimately prevailed.  It was immortalized in Shelby Foote’s 1952 fictionalized account of the battle.

Shiloh also reads canine, thanks to Newberry medal-winning novel Shiloh, first published in 1991.  Phyllis Reynolds Naylor penned the story about a boy who rescues a dog from an abusive owner.  The dog in the story is a beagle called Shiloh.  The original story spawned sequels and a feature-length film, so Shiloh is somewhere up there with Fido and Lassie for many.

Then there’s the music Shilo.  Neil Diamond recorded “Shilo” back in 1967 but it wasn’t immediately released as a single.  It eventually became one of his standards.  The backstory is well known: Shilo was Diamond’s imaginary friend during his lonely childhood.

Between the Biblical reference, the battlefield, and the song, Shiloh has surfaced as a given name for generations.  In the 1940 Census, Shiloh seems split between men and women.  During the twentieth century we embraced Shane and Sheila, and in more recent years, ends-with-o has been a big category for both genders.  Little wonder that some parents were interested in Shiloh.

It just so happened that one of those couples was Angelina Jolie and Brad Pitt.  They welcomed daughter Shiloh Nouvel in 2006, a little sister for Maddox and Zahara.  She was the first biological child for the high-profile pair, born in Namibia to thwart publicity.

There’s also actor Shiloh Fernandez – you saw him in Red Riding Hood – and Houston Texans’  Shiloh Keo.  Both men were born in the 1980s.

The trouble with Shiloh is that the Jolie-Pitt family is just so very prominent.  Parents who love the sound of Shiloh may hesitate to use a name associated with such high profile celebrities.  But if you have reason for your affection – ties to place, an affection for the song, or maybe a desire to use a spiritual name with a modern, gender neutral feel, Shiloh could work well, for a son or a daughter.