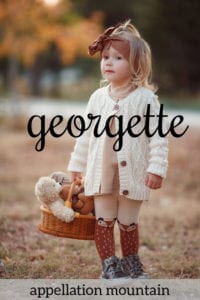 It’s easy to see that Georgette comes from George, a feminine form of a classic masculine favorite.

The -ette ending is French. Just ask Juliette and Claudette. But it doesn’t feel exclusively or extravagantly French. After all, Scarlett and Violet rank in the US Top 100. If anything, it feels like a promising alternative to Annabelle and Charlotte.

But make no mistake, this name is every bit as French as a croissant. It peaked around 1920 there, so the average French Georgette is 80-something.

Unlike Chanel, she’s not a household name.

But de la Plante favored a lightweight crêpe fabric for her designs. So much so that it eventually came to bear her name: crêpe Georgette.

Unlike Velvet or Satin, this was a name long before it was a fabric. But today it is heavily associated with the fabric, too.

There’s also English novelist Georgette Heyer. She published her first work in 1921. While she lived in Africa and Macedonia thanks to her husband’s engineering career, most of their life was spent in England. Heyer spun tales of Regency romance, along with a few historical novels and thrillers.

She published dozens and dozens of works, many of them bestsellers. And while she’s not a household name today, if you were a reader in much of the twentieth century, I imagine her work was inescapable.

On another artistic note, it’s also the name of Rene Magritte’s wife.

Nancy mentions at least two movie characters by the name in the 1920s.

Most of the more popular -ette names were falling in the 1970s: Annette, Jeanette, Lynette.  Others, like Paulette, Claudette, and Nanette, had fallen even earlier.

So perhaps the sound had simply run its course. Or maybe television intervened.

In 1972, Georgia Engel appeared on sitcom The Mary Tyler Moore Show as Georgette Franklin Baxter, the sweet but scattered girlfriend for Ted, Mary’s colleague. While she’s a recurring character, her appearances become more frequent as she and Ted marry and start a family.

It’s the kind of role that might put a name in the spotlight, and boost its use. But instead, it seems to have ushered the name out of the US Top 1000.

Nearly five decades later, we’re wild about Scarlett and Juliette. Lots of other -ette names are attracting attention, too. The once-stylish sound of the 1920s is coming around again.

Georgia feels sweet and sparky today, the kind of name that appeals to plenty of parents, but isn’t too popular – yet. Georgette takes feminine forms of George in a far less expected direction. Still, it’s not as far out-there as Swan Lake hipster baby name Odette.

Melissa McCarthy chose the name for her younger daughter in 2010.

So far, it remains very rare – just 35 girls were named Georgette in 2018. But that’s up from 21 the year before. It’s possible the name is slowly, quietly catching on. And that means it could be the exactly right name if you’re after something different – but not too out-there, either.

What do you think of Georgette? Or do you like Georgia/Georgiana better? 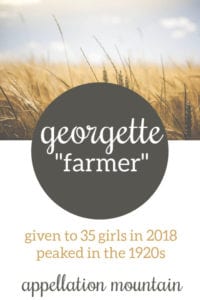