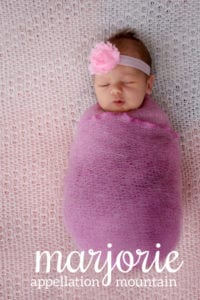 Marjorie appears in many a nursery rhyme. Maybe it’s time to return this name to actual nursery schools, too.

Thanks to Lola and JNE for suggesting our Baby Name of the Day.

Jack stars in several childhood staples, along with fellow water-fetcher Jill, Marys Quite Contrary and the one with the lambs, Polly, Peter, Tom, and Simon. The list goes on.

Open any copy of Mother Goose, and odds are you’ll find “See Saw Margery Daw.”  First published in the eighteenth century, some version of the rhyme is likely far older – and, of course, open to interpretation, like all nursery rhymes.

And, like the names of her fellow fictional children, Margery would’ve been fairly common at one point.

Saint Margaret of Antioch escaped from the belly of a dragon, or so the legend goes. Crusaders brought the story – and the name – back to England, where it became Margery. While it’s tough to imagine Margaret as a trendy name, that was the case many centuries ago.

Speaking of the distant past, way back in the fifteenth century, a real-life Margery penned The Book of Margery Kempe.

While memoirs feel commonplace, even saturated, by twenty-first century standards, they were rare in her day. It’s sometimes called one of the earliest autobiographies. Except Margery wrote in the third-person, detailing her pilgrimages to distant lands, and a wide range of religious experiences.

It’s a fascinating story, but I can’t tell if her fame would’ve helped the name, hurt it, or simply reinforced how very popular it had become.

Getting from Margaret to Margery seems relatively straightforward. Middle English gives us Mary from Maria, Lucy from Lucia, and Cecily from Cecilia. Ending feminine names with an ‘ee’ sound was the norm.

What explains the spelling switch, from -gery to -jorie?

Turns out it’s the herb, marjoram. And as for that word, its origins are unclear, but probably trace back to India.

The thirteenth century Marjorie of Carrick, mother of Scotland’s Robert the Bruce, used the spelling. In turn, Robert gave the name to his firstborn daughter.

By the 1700s or so, this name had faded – in all spellings. When it was rediscovered a century later, the -jorie form dominated. While Marjorie spent several years in the US Top 20, and even more in the Top 200, Margery barely made it into the Top 300.

The spelling helped us see this as a distinct name from Margaret, too.

Notable women by the name abound, including:

Then there’s novelist Herman Wouk’s creation, the title character in Marjorie Morningstar. His bestselling 1955 novel became a successful movie just a few years later. It starred a young Natalie Wood as Miss Morningstar. Born into a traditional Jewish family, it’s the story of a young woman’s attempt to carve out an independent – and somewhat rebellious – path of her own.

Many of those girls would’ve been mid-century Margies.

Because if not Morningstar, then it’s My Little Margie that makes this name feel stuck in the ’50s. From 1952 to 1955, the public followed young Margie Albright’s madcap capers, first on radio, then on television. The show owes much to I Love Lucy, but is mostly forgotten today.

Other fictional characters answered to various forms of the name.

That meant, of course, that Marge was squarely in mom name territory when we first met Homer and Marge Simpson in 1987, as a short on The Tracey Ullman Show. She of the towering blue hair might be the most prominent Marge for most would-be parents today.

What do you think of Marjorie?  Is this name ready for revival? 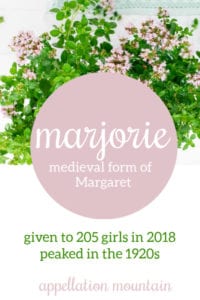