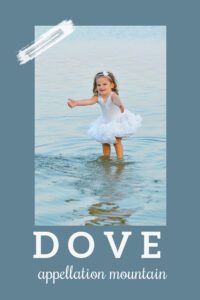 The baby name Dove might be the next girl name borrowed from the birds.

Let’s start with Dov, hold the e. It’s a masculine name, Hebrew in origin. And Dov comes with paws, not wings. The name means bear.

BIRDS OF A FEATHER

But the baby Dove has long been used in sparing numbers for girls in the US. It tracks with Robin and Wren, Raven and Paloma. Some feel more obviously avian; others seem more subtle.

The birds are cousins to pigeons, members of the Columbidae family, along with a few hundred others. Names like Jonah and Jemima also relate to doves.

It’s thought that the word comes from the Germanic dubon – to dive, related to their pattern of flight – via the Old English dufe.

In the story of Noah, a dove signals the end of the floods. But long before that, the birds were symbols of ancient goddesses in Mesopotamia and Greece, to name just two.

In Christianity, a dove often represents the holy spirit. They’re significant in Shintoism and Buddhism, too.

But perhaps it’s best known as a symbol of peace. The association goes back to ancient Greece. Early Christians depicted a dove holding an olive branch, using it in both baptisms and funerals at different points.

For centuries, doves have also been associated with peace among nations. In 1948, Pablo Picasso’s lithograph La Colombe inspired the symbol of the Word Peace Council. They adopted the dove symbol in 1949.

Picasso spoke at a future World Peace Congress, and named his daughter Paloma, from the Spanish word for dove.

In 1985, Larry McMurtry published Lonesome Dove, the Old West story of retired Texas rangers driving cattle to Montana. It became a bestseller and won the 1986 Pulitzer Prize for Fiction. It inspired a television mini-series adaptation, too. Three more books – and mini-series – followed into the 1990s.

In the novel, Lonesome Dove is the name of the Texas border town where the story begins. McMurtry has also said that the title refers to one of the characters, a teenage orphan.

It’s not a personal name at any point in the story, but it’s a powerful association for many.

If you speak Italian, this is simply a word meaning where. But it’s pronounced doh-VAY.

It’s possible you’d find Dove as a surname, either for someone who kept the birds or maybe someone who shared their gentle nature.

But in recent years, there’s no question where at least some parents have first heard the possible baby name Dove.

Cameron was born Chloe Celeste Hosterman. She took her screen name from a childhood nickname.

If you know your Disney villains, chances are you know what comes next.

In 2015, Cameron took on the role of Mal, daughter of Maleficent in an alternate universe where all the Disney villains have been imprisoned on the Isle of the Lost. But now a handful of the “villain kids” are getting a chance to enroll at Auradon Prep, where the children of the heroic good are educated.

Mal falls in love with Ben, son of Belle and the Beast, and heir to the throne of Auradon.

Drama follows. Enough for not one, but two sequels.

We meet lots of other descendants of our favorite fairytale characters along the way. The third in the series debuted in August 2019. If your kids are the right age, you’ve inevitably heard the songs.

That makes Cameron a major celebrity in some circles.

While the actor has graduated to more adult roles – she plays Schmigadoon!’s Betsy on Apple TV+ and has launched a singing career – it’s safe to say that an entire generation now thinks of Dove as a given name.

It also suggests that Dove might now appeal well beyond Disney Channel fans.

Reality television’s Natalie Halcro of E’s Relatively Nat & Liv gave the name to a daughter in early 2020. So did Teddi Mellencamp, of The Real Housewives of Beverly Hills fame.

Katy Perry and Orlando Bloom welcomed Daisy Dove in 2020, too.

While it remains rare, there are signs that the baby name Dove might just take flight.

What do you think of the baby name Dove? 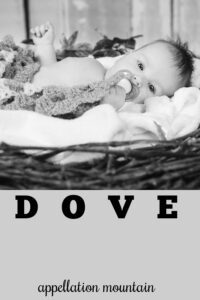