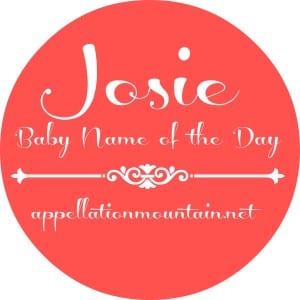 She’s short for Josephine, but in our age of Sadie, this mini name can stand on her own.

Thanks to Elisabeth for suggesting Josie as our Baby Name of the Day.

It’s hard to say how many women have answered to Josie.  That’s because she’s so often a nickname, not just for Josephine, but for many a Jo- name, including imports.

What we do know is that she’s been given as an independent name ever year since 1880 and currently stands at #265 – which is pretty popular.

It’s a lot of random associations, but it adds up to a picture: Josie is humble and homespun, but with a hint of indie cool.  She’s sweet but also sassy, and manages to seem like a retro throwback choice while still sounding at home in 2014.

Assuming Josie retains the same meaning as her source names, it’s a faithful choice, too, translating to “he will provide.”

That’s an appealing picture, but from a numbers perspective, it isn’t clear which way Josie is trending.

Other formal name possibilities include Joselyn, in more spellings than you can imagine, as well as choices like Josefina, Josette, and Joselle.

But the question is whether Josie stands on her own, and I think the answer is yes.  Jazzy, sweet, and used more steadily than you might imagine, Josie is a short name that works well – less popular than Sadie, but just as stylish.