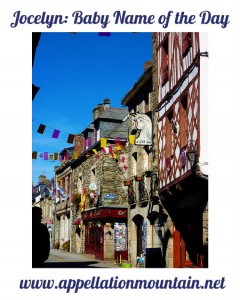 She’s a twenty-first century hit for girls, with roots in two separate – and storied – names.

Thanks to Kristin for suggesting Jocelyn as our Baby Name of the Day.

There are two possible origins for Jocelyn.  One is decidedly ancient.  The other, only a few centuries younger.

Let’s start with the Geats, also known as the Gautigoths or the Gauts.  The tribe dates to at least the second century AD, when Ptolemy mentioned them.  Sometime after the Middle Ages they blended into the emerging nation-state of Sweden.  They’re not forgotten, though.  Among other references, Beowulf was a Geat.

The given names Gautselin and Gauzelin pay tribute to Geatish heritage and came to England with the Normans, where they evolved into Goscelin, Gosselin, and Joscelin.  By the fourteenth century, the name was fading.

The second name was Josse or Josce.  Also known as Judoc, the first notable Josse was born a prince of Brittany in the seventh century, but renounced all material wealth to pursue the life monastic.  Josse was later acknowledged as a saint, and a popular one, too.  His relics ended up in Winchester, and he was venerated throughout Western Europe.

Jocelyn feels like a form of Josce, doesn’t it?  I couldn’t find Jossel or Joscel, but Josson was in use.  It’s generally agreed that Josce became Joyce, influenced by our words joy and rejoice.

Plenty of men have answered to some form of the name, including:

Here’s a fun fact: the Italian-sounding surname Costello is actually an Irish surname derived from Jocelyn, via Oistealb or Osdealv, the Gaelic form of Jocelyn.  Play a few more rounds of whisper-down-the-alley and you’ll have Costello.

You may recall Shannyn Sossmon as the well-born Lady Jocelyn, William Thatcher’s out-of-his-league love interst in A Knight’s Tale.  It was an anachronistic choice, but then, the movie was full of historical inaccuracies – intentionally so.

Back to the present.

Joyce was solidly established in the US Girls’ Top 100 in the 1920s, headed for a peak of #11 in 1938/39.  In 1927, Cecil B. DeMille’s The Yankee Clipper featured William Boyd as the dashing hero rescuing damsel-in-distress Lady Jocelyn.

The name entered the US Top 1000 for girls the same year, and has steadily gained favor.  2001’s A Knight’s Tale probably help push her into wider use.

She’s been in the Top 100 since 2002, and alternate spellings are plentiful: Jocelynn, Joselyn, and Joslyn all rank in the Top 1000.

Given the popularity of the letter J, our affection for -lyn endings, and it is no wonder that Jocelyn has found favor.  She also hits the same sweet spot that names like Allison satisfy – tailored and modern, but not invented or gender-bending.

If you’re looking for a compromise between Alice and Mackenzie, Jocelyn might be a name to consider.