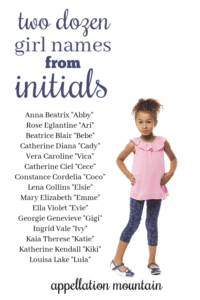 I have a soft spot for girl names from initials. Maybe it’s because my own name started out that way: Abigail came from my initials at birth, AB.

Turns out that initials sometimes offer us an Intriguing way to reinvent our names. Girl names from initials can spark up a classic first-middle pairing with a spunky nickname, or allow parents to hand down family heirlooms and create something brand new for their child, too.

It falls somewhere between just-for-fun #namegames and a creative way to re-invent your name. Or even to honor a loved one without handing down their name in full.

Some of the most popular initials-as-name combinations are used more often for boys. There’s DJ, of course – though Full House and Fuller House gives us eldest Tanner sibling Donna Jo, known as DJ, or even Deej.

And for this exercise, we’re looking for those names that might be made from initials – but are sufficiently name-like that they might appear on a birth certificate or diploma as formal names, too.

I started out life as Amy Beth. Not much nickname potential in seven letters, three syllables. But I became AB, and then Abby. Annabelle could lead to Abby, too, and so could lots of double names: Anna Beatrix, Alice Bellamy, Aria Bevan.

I can imagine AR leading to Ari. Ava Rebecca, maybe? Or Alice Regan or Anna Reese?

But perhaps RE is even more obvious, especially with a long E sound in the middle. Rachel Eden, Remy Eleanor, and Rose Eglantine all come to mind.

How about Beatrice Blair? Or maybe Bianca Briony? There are so many great B names for girls, and a few of them start with a strong “Be” sound, which helps reinforce the nickname.

Initial names are truly tempting when they offer a clever update to long-time favorites. I can imagine Catherine Diana or Caroline Dee becoming Cady.

Nearly any two C names lead to Cece. I especially like using one soft C name, though. Cecily Cate, Celia Cascata, Catherine Ciel, and Celeste Corisande are at the top of my list right now.

Some of these work best when it’s not just about the initials, but about the first syllables of the name. Constance Cordelia, Cora Consuelo, and Colette Coraline all lead logically to Coco because of the repeating Co letters.

Ella Catherine, Eloise Colette, and Ellison Cate might all work, too.

From classic Mary Elizabeth to rarities like Maribel Estrella, ME – pronounced Emme – is a promising pair of initials.

Of course, a name like Emily Eden or Emma Elise appeal, too.

The Pokemon character spells it Eevee, which drives the point home: lots of great E names, paired with a V middle could get to the nickname Evie.

Ella Violet is my favorite combination from the Top 100. Others that come to mind: Eden Victoria, Eliza Veronica, and Elodie Vale.

Double initials work really well for girls. There’s Cece and Gigi, and Bebe, Didi, Fifi, Kiki, Mimi, and Vivi all have some possibility, too.

Gigi veers close to the nickname-only category, but I’m including it hear anyhow. Georgia Genevieve, Ginevra Grace, Gwendolen Garnet, and Gemma Guinevere all lead to Gigi.

Ivy sparked this post, of course, thanks to Isabel Veronica.

I tend to think of JC as masculine, short for James Christopher or similar. But there’s no shortage of JC combinations for girls, like Jessamy Claire or Julia Caitlin. A short, modern name drawn from initials like this can offer a compromise between two naming styles.

Likewise, Joan Caroline or Joanna Calista could shorten to Jo C – Josie. Though the need to switch from a ‘c’ to an ‘s’ might make this one feel a little more awkward than some of the other possibilities.

KT might come from something as classic as Katherine Theresa. (And, of course, Katie comes from Katherine anyhow.) On the more daring side, there’s Kaia Therese or Kinley Tate. But somehow, I keep coming back to more classic choices to get to KT. Singer KT Tunstall was born Kate Victoria.

Like Katie from KT, I keep drifting towards the traditional KK names to get to Kiki. Katherine Kendall, maybe, or Kate Kelly.

As with Coco, Lola requires more than just LL initials. It works best when the sounds are present, too. Lora Alice, maybe. Or Lois Landry. (Is that too close to Lois Lane? Ooh … that leads to Lola, too!)

Lula started out as a nickname for Louisa. It could be a contracted form of Luella, too. But for our purposes, how about something like Lucy Elaine, Lucia Landry, or Louisa Lake.

So many names start with a strong May sound. A combination like Mabel Zara or Mae Catherine could easily lead to Macy or Maisie. For years, I had Marie Claire on my list, with the nickname Macy.

So many formal names lead to Millie, but M.L. or even Em.L. and M.El. names can get there, too. Emerson Lily might be my favorite, but how about Mirabel Elise?

Something like Renata Mia would logically lead to Remy. A more traditional choice could work, too – think Regina Marie or Rebecca Mary.

My favorite way to get to Romy is from Rosemary. But the possibilities abound.

Sadie emerged from the traditional Sarah, so I tend to like Sarah as first name. But adding a strong D middle emphasizes the nickname: Sarah Davina, Sarah Delaney, or Sarah Darcy, maybe?

The initials TL – or T with an El- name – might lead to Tillie. I like Tara Ellis and Teresa Eleanor.

Veronica and Victoria could get to Vica without a middle name. But I like Veronica Claire even better. Vera Caroline and Victoria Cate work, too.

Something like Zora Evangeline could reduce to Zoe. Or maybe Zenobia Elaine.

What are your favorite girl names from initials?