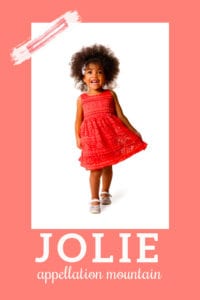 The baby name Jolie sparkles with a great meaning and a dash of Hollywood glamour.

Thanks to Jeanne for suggesting our Baby Name of the Day.

If you made it through French 101, odds are you can translate the baby name Jolie.

It comes from the French word for pretty – though it’s not used as a given name in France.

Jolie shares roots with jolly, which makes this name more than just a pretty face.

Intriguingly, jolly might come from words meaning joy, or possibly jol, the Old Norse word for the midwinter feast, the seasonal celebration eventually rolled into Christmas.

As meanings go, it’s quite appealing.

A tiny number of girls received the baby name Jolie as early as 1947.

One possible explanation: Jolie Blonde, a Cajun waltz about a pretty – but unfaithful – girlfriend. While that sounds obscure, it’s actually a standard – sometimes called the Cajun National Anthem.

The first recording dates to 1929. By the 1940s, country music was becoming an established genre. Artists recorded established songs – and riffed on them, too. At least eight country Billboard Top 100 songs referred to Jolie – or Jole Blon – between 1947 and 1950.

It was one of Waylon Jennings’ first recordings in 1958.

Depending on the version you hear, it might be mostly in French. Or some mix of English and Cajun-influenced French that’s not necessarily easy to decipher. No doubt some listeners heard some version of the song and interpreted Jolie as a girl’s name.

BY WAY OF BUDAPEST

Here’s a twist: something else happened in 1946, connecting this name not only to Louisiana, but to Hungary.

Born Janka Tilleman and called Jancsi, the future Jolie Gabor opened a jewelry shop in 1930s Budapest. Her venture succeeded, but the German occupation forced the family to flee. Eventually, Gabor arrived with three of her daughters in New York. By 1946, she had re-established her business in her new country.

Would it have been sufficiently established to inspire parents? Perhaps a few.

Her daughters’ fame – Magda, Zsa Zsa, and Eva all became actors – grew in the 1950s, and Jolie Gabor, too, would’ve been in enough headlines and news stories to attract attention.

Unless you’re a country devotee, native to Louisiana, or big fan of the Gabor family, though, odds are you first heard the baby name Jolie sometime around the late 1990s.

Born Angelina Jolie Voight, the daughter of actor Jon Voight dropped her surname to launch an acting career in the 1990s. By 1999, she’d earned an Oscar for Best Supporting Actress in Girl, Interrupted. From there, she’s gone on to make a mix of blockbuster hits and critically acclaimed smaller films, some of which she directed.

Angelina is known nearly as much for her humanitarian work and her family of six children with ex-husband Brad Pitt.

While naming a child after a living celebrity can be a dicey prospect, Angelina Jolie has an established career and track record that goes beyond the silver screen.

Besides, the baby name Jolie clearly predates the actor.

In some ways, it even predates Jolie Blonde.

That’s because Jo names have been around for ages. The 1880 US Top 1000 included Joanna, Josephine, Josie, Joanna in three spellings, and Joella. The 1920 charts were similar, including Jo and Josefa, plus Joanne and Joanna in various forms. 1960 gave us Jody and Jodie, Joellen and Jolene.

In fact, the baby name Jolie debuted in the US Top 1000 back in 1968. It remained on the fringes until 1974 – which happens to be the year Angelina Jolie was born – before slipping back towards obscurity.

What explains the debut? A handful of pop culture references, combined with all of those Jo names and country music’s continuing influence seems plausible.

But the birth of Joely Fisher, daughter of singer Eddie Fisher and actor Connie Stevens, might be the best explanation. While the spelling is different, Fisher and Stevens were major celebrities. Fisher’s love affairs – his first marriage to Debbie Reynolds, their divorce and his brief marriage to Elizabeth Taylor, and then his subsequent marriage to Connie Stevens, was the stuff of celebrity gossip magazines at the time.

The Joely spelling debuted in the Social Security data in 1967, and enjoyed a brief spike in use – suggesting that it’s the most likely explanation for the rise of Jolie, too.

If several factors combined to explain the late 1960s wave of Jolies, there’s no question what motivated the current one.

The baby name Jolie returned to the US Top 1000 in the year 2000, just as Angelina became a household name.

It stands at #711 today, neither common nor obscure.

For decades, the baby name Jolie belonged to the prettiest girl. But it also nodded to so many traditional Jo- names, from traditional Josephine on down.

In the 2020s, Jolie sparkles with a mix of Hollywood glamour and maybe a little of that Gabor jewelry dazzle, too. But Angelina helped redefine the name, adding sleek style and sophistication to Jolie.

Overall, it’s an intriguing choice for a daughter. It could honor a beloved Joe or Jo, and yet it’s also part word name, rich with meaning and a surprising backstory that takes across two continents and back.

What do you think of the baby name Jolie? 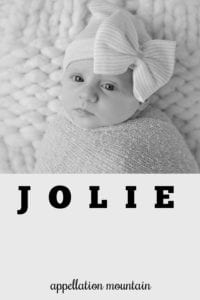