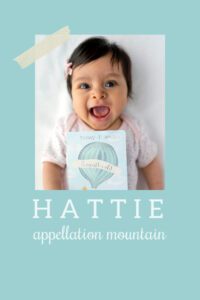 The baby name Hattie shares the same style as favorites like Millie and Ellie.

Our Baby Name of the Day comes from this list of girls’ names inspired by Sadie.

There’s no Hattie without Harriet. And there’s no Harriet until we have Henry.

Let’s back up. The Dictionary of Medieval Names from European Sources lists the earliest Henrys in the 800s. But the name isn’t necessarily recognizable. Over the years, it’s been Heinrich and Hendricus and such.

The Normans brought it to England when they conquered, and the English heard the French Henri, and pronounced it more like Harry. We eventually came to use Harry as a nickname for Henry. (Just ask the current Duke of Sussex, popularly known as Prince Harry, but born Henry Charles Albert David.)

Henrietta and Henriette developed as feminine forms of Henry, but so did Harriet, at least by the 1500s.

By the late 1800s, Hattie appeared in the US Top 100. In fact, the name remained highly ranked into the 1910s. The data suggests that the nickname was more popular than Harriet, though Harriet also dipped a toe in the US Top 100. Henrietta wasn’t too far behind.

Of course, data from the era is less reliable than you might think. Still, lots of evidence suggests that Hattie was a common choice for a child at the turn of the twentieth century.

The nineteenth century gives us plenty of notable women by the name: Harriets Tubman and Beecher Stowe; pilot Quimby; First Lady Lane (she was niece to bachelor president James Buchanan, and served as his official hostess); poet Monroe; pianist Cohen; and actor Bosse.

But how ’bout Hatties?

There’s Hattie McDaniel, the first African-American to win an Academy Award for her work in 1939’s Gone With the Wind.

In 1932, Hattie Caraway became the first woman elected to the US Senate. (She was initially appointed to complete her husband’s term, after he’d died in office. That wasn’t unusual. But she went on to win the seat and defend it – which was a first.)

Others included British comedienne Hattie Jacques and Hattie Peterson Oberg, a member of the All-American Girls Baseball League, as well as other actors and athletes, musicians, politicians, and notables of all kinds.

And yet, all of them place the name squarely in the past.

In 2011, Tori Spelling named her second daughter Hattie Margaret. She’d proven herself an on-trend namer, welcoming son Liam in 2007 and Stella in 2008. Both names rose dramatically after their births; Hattie re-entered the US Top 1000 for the first time in over fifty years in 2011.

It’s not all down to Spelling, though. The name had risen modestly prior to the celebrity birth announcement.

Another possible factor: Parenthood debuted as a television series in 2010, including a teenager named Haddie, daughter of Adam and Kristina Braverman. It’s not the same name, but it’s close enough to suggest it contributed to the rise of Hattie. And, at least for many American parents, the ‘tt’ does sound an awful lot like Haddie.

But the biggest boost might have come from a little film: 2010 documentary Babies, which followed four newborn children from very different parts of the world through their first year of life. Hattie is the American child, born in San Francisco. Besides the success of the movie itself, all four children’s faces and names appeared on the promotional posters.

So there’s lots of reason that the name could have seen an increase in use going into 2011.

Celebrity news and documentary films aside, there’s another reason Hattie took off like a rocket, and that’s the success of Sadie.

Originally short for Sarah, Sadie went from just outside the US Top 100 to solidly within it, thanks to reality series Duck Dynasty. As Sadie soared, other spunky nickname-names also caught on in a big way: Millie, Maisie, Charlie (for girls), and Bonnie belong on this list. So do Evie (not Eva) and Rosie (not Rose).

Plenty of other names fit the trend, and many are rising. But Hattie remains one of the clear alternatives parents chose as a name like Sadie, but slightly different.

Overall, parents are still embracing nickname-proof names. And that creates space for the success of Hattie. It’s vintage and fearless, the kind of name that you might find adventuring in Africa with Humphrey Bogart and Katharine Hepburn, or marching for women’s suffrage circa 1913.

No wonder we’ve choosing it for our daughters.

What do you think of the baby name Hattie? 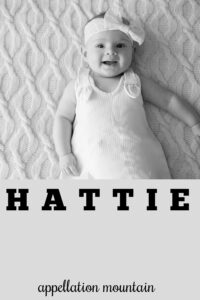