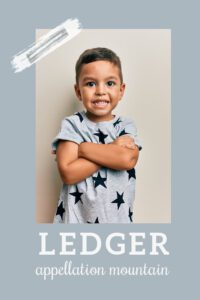 The baby name Ledger was borrowed from a Hollywood leading man, but it’s also a medieval gem, long undiscovered.

Thanks to Kirsten for suggesting our Baby Name of the Day.

The story of the baby name Ledger starts with Germanic roots.

The Dictionary of Medieval Names from European Sources lists it as Liutgar, along with at least a dozen other recorded forms. Other places list it as Leodegar and Leudagar, a combination of the elements liut – people – and gar – spear.

One of those early bearers of the name served as Bishop of Autun in the seventh century. He died a martyr. His name is recorded as Léger, and it’s been used as a boy’s name in France for years. (Though not in recent years.)

There’s an eighth century Saint Ludger who founded a monastery in Munster.

The Normans brought it to England, and it evolved from there to the surname Ledger.

But what about the book?

We record transactions – usually financial – in a ledger. It started out as a type of book, but they exist in electronic form, too, now. The word has been used since at least the late sixteenth century. This word seems to come from the Dutch leggen – to place or to lay.

As for ledge, that traces its origins to leggen, too. Or perhaps to the Swedish lagg – rim. It might refer to anything from the edge of a cliff to a narrow bookshelf.

Another one to consider: legerdemain, meaning sleight of hand. It comes from a Middle French phrase meaning light of hand. That’s Léger – the same as the personal name – but the meanings are different.

None of these link to the personal name or surname, but we’re used to hearing them to some degree. A handful of newspapers use Ledger in their names, too.

Parents don’t consider the baby name Ledger because of newspapers, though.

And probably not for the medieval saints.

The name’s rise is all down to the late Heath Ledger.

The Australian actor became a star in his home country in the 1990s. By 1999 he was making movies in America, and became a star in 2001’s A Knight’s Tale. His turn as Ennis Del Mar in 2005’s Brokeback Mountain earned him an Academy Award for Best Actor.

The rise of the name follows his career path. His tragic 2008 death inspired eve more to consider the name for their sons.

After all, we’re naming our children after musicians like Hendrix and Lennon, and historical figures like Lincoln and Kennedy. If children can answer to Harlow and Monroe, Crosby and Hudson, then the baby name Ledger fits right in.

Like many surnames, the baby name Ledger has been used in small numbers.

In fact, it debuted in the US data way back in 1923, with five births.

But for most of the twentieth century, no one was choosing the name for their children.

It doesn’t reappear until 2002, after the actor starred in A Knight’s Tale. That year, nine boys received the name.

The baby name Ledger jumped to 61 boys in 2008, the year of the actor’s tragic death. A year later, 95 boys were named Ledger.

But it wasn’t just the actor.

Along the way, Ingrid Law penned a New York Times bestseller titled Scumble, part of her Savvy series. The young adult novel starred a teenage character named Ledger. It was published in August 2010.

Even if the actor gets credit for jump-starting this choice, it’s more than his legacy that propelled the baby name Ledger into wider use.

The baby name Ledger offers an appealing combination. The sound is stylish. It feels a little bit rugged and outdoorsy. It’s modern, but not invented; novel, but not truly new.

If you’re after a strong and uncommon name for a son that feels creative and accomplished, while still speaking to the natural world, the baby name Ledger seems like an uncommon choice that checks all the boxes.

What do you think of the baby name Ledger? 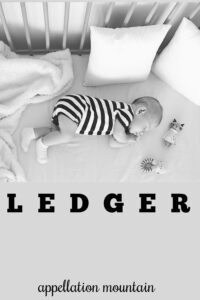