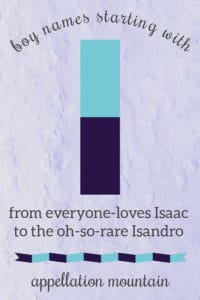 When it comes to boy names starting with I, two varieties dominate. There are the every guy names, the likable and familiar favorites, like Isaac and Ian.

But then there are the daring boy names starting with I, from Shakespeare’s Iago to Elba’s Idris.

Is there any middle ground?

Maybe. A saintly classic and some vintage options round out the list, too. But I ranks just eighteenth out of the twenty-six letters of the alphabet in terms of popularity. In terms of vowels, it bests only the letter U. So it’s no surprise that we go from familiar favorites to I’ve-never-heard-that-in-real-life pretty quickly.

Let’s look at all of the possibilities, from the Top 100 to the downright rare.

BOY NAMES STARTING WITH I IN THE US TOP 1000

When it comes to I names, Isaac is the leader of the pack. This Old Testament favorite comes with a delightful meaning: he will laugh.

Another Biblical boy name, Isaiah also benefits from the ending -a sound, shared with Elijah and Luca and more.

The Slavic form of John, Ivan is the name of many a fictional Russian. That great middle V might make Ivan more appealing in our Everett-Levi age.

A deeply significant place name, Israel started out as a personal name. It has ranked in the US Top 1000 every year since data was first collected in 1880.

Ishmael is a Biblical name and the unforgettable narrator of Herman Melville’s Moby Dick. Drop the ‘h’ and Ismael is the slimmed-down version, used in Spanish.

A Basque name, Iker sounds a little like so many r-ending favorites for our sons. Recently retired footballer Iker Casillas put his name in the spotlight.

The Arabic – and another – take on Abraham.

Another form of Isaiah, with that stylish -s ending.

A high-Scrabble-value tweak to Isaiah.

A slightly different spelling of Isaac.

An Old Testament name meaning watchful, Ira enjoyed a a burst of popularity as Protestant families rediscovered Biblical picks. It’s been neglected in recent decades, but could follow Ezra and Asa up the charts.

Actor Idris Elba makes his distinctive name instantly familiar. It’s the name of a prophet in the Quran, but also Welsh, with separate roots.

A Sanskrit name with an on-trend sound.

UNCOMMON BOY NAMES BEGINNING WITH I

A Welsh king and a Shakespearean villain. Disney borrowed the name for a bad bird in Aladdin. But Iago is ultimately just another form of the evergreen James.

A mythological name tied to a tragedy. Icarus and his father escaped imprisonment on wings they made themselves. But when Icarus flew too close to the sun, the wax on his wings melted. The sad story likely explains why the name feels rare, but I like Seth Godin’s additions to the tale – and they might make the name more wearable.

The Spanish form of fiery Ignatius.

The Roman family name takes its spelling from ignis – fire, in Latin. Several saints answer to Ignatius, including the founder of the Jesuits religious order.

A mini name in the key of Max and Gus. Former president Dwight “Ike” Eisenhower lends it something of a midcentury vibe.

The slimmed-down Hungarian take on Germanic Ermenirch or Emmerich.

Cool and breezy Indio is the town that hosts Coachella. Robert Downey Jr. gave the name to a son back in 1993.

It sounds like a surname – and today, it probably is. But Ingram’s roots are found with a Germanic given name, brought to England by the Normans.

A Scottish name, often used as a an Anglicized form of Angus.

Jewish families often adopted Irving as an English name, substituting for Isaac or, in the case of songwriter Irving Berlin, Israel. The name peaked in the 1910s and feels rare today. Some of the most famous bearers have it as a surname (hoop star Kyrie Irving) or don’t seem like Irvings at all. Actor Ving Rhames is actually Irving.

A Biblical name meaning “with me,” Itai has been well-used in modern Israel.

Cousin to Yves and similar names, Ivo comes from the element iv, referring to the yew tree.

What are your favorite boy names starting with I? What would you add to this list? 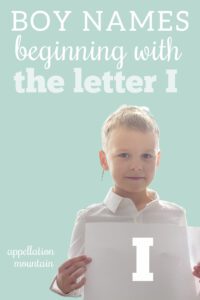 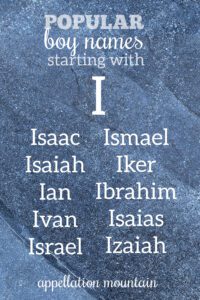