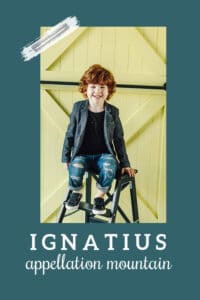 Thanks to Sara for suggesting our Baby Name of the Day.

The family name Egnatius dates back to the Etruscans, the civilization that flourished prior to the founding of Rome. Gellius Egnatius commanded an army in the third century BC. Six hundred years later, the name was still in use.

The Latin ignis means fire – think of ignite. And igneous rock comes from a volcano, the product of cooled lava.

Egnatius probably traded the ‘e’ for the ‘i’ spelling thanks to the association. Now most baby name guides will tell you that Ignatius means fiery.

While the story is a little complicated, fiery is a great meaning. And Ignatius might be a touch more subtle than the equally saintly Blaise.

There’s more than one Saint Ignatius, including a first century Bishop of Antioch.

But the figure that comes to mind for most was born Inigo Lopez de Loyola, future founder of the Catholic Jesuit order. Pope Francis is a Jesuit.

The young Inigo was named after another saint. The Old Basque name Ennecus – or Enecon, Enecus, Eneko, or Innicus – probably comes from elements meaning “my” and a diminutive suffix. That translates to something like “my dear.”

But Ennecus was commonly known as Saint Iñigo, the namesake for the future saint. He was an eleventh-century abbot canonized in 1259.

Loyola was the youngest son in an aristocratic family. He became a knight, and fought in many a battle. In 1521, he was severely injured during a skirmish at Pamplona. During his convalescence, Loyola read works on Christianity – and his life changed forever.

Instead of returning to the army, he retired his armor and went on pilgrimage. When Loyola returned, he would study, preach, and, while studying at the University of Paris in 1534, found the Society of Jesus with six other men.

Iñigo became Ignatius at some point during his sojourn in France. It was never a deliberate name change – just a shift to using a name more familiar outside of his homeland.

From the beginning, the Jesuits focused on education. By the time Loyola died in 1556, they’d already established 74 schools on three continents.

Thanks to all of the saints, forms of the name are in use throughout Europe and the Spanish-speaking world.

John Kennedy O’Toole’s A Confederacy of Dunces was published in 1980, more than a decade after the author’s death. It’s now considered a literary classic, but O’Toole’s Ignatius J. Reilly isn’t a particularly likable character.

There’s a successful Ignatius Gallaher in a short story in James Joyce’ Dubliners.

Born on a slave ship, Ignatius Sancho lived much of his early life in service in England. In his later years, he became known for his writing, and his posthumously published Letters of the Late Ignatius Sancho, an African, helped make the case for the abolition of the slave trade.

There’s a Harry Potter tie. Ignatius is the middle name of Percy Weasley.

“Lust for Life” isn’t exactly a lullaby, but if Jason Biggs can name his kid after Sid Vicious, is Iggy Pop really off limits?

Cate Blanchett and Andrew Upton gave the name to their youngest son in April 2008: Dashiell, Roman, and Ignatius.

If Iggy doesn’t work, there are other possibilities: Nat and Nate, usually short for Nathan or Nathaniel. And Nash seems like another option.

The baby name Ignatius is one of those intriguing rarities.

On the one hand, thanks to the legacy of Saint Ignatius of Loyola, the name is broadly recognized. That’s even more true given the number of schools and universities named in his honor. (There are four Loyola universities in the US alone.)

And yet, it certainly belongs with the more unusual name in terms of use.

Many of the parents who choose Ignatius are likely Catholic. The saint’s significant reputation can be a plus or a negative, depending on your worldview. But as the name of several saints, including a pretty heavy hitter, it’s not surprising that the baby name Ignatius suggests a spiritual motivation.

But that’s not to say it’s off limits to anyone else.

The trend towards longer, more elaborate choices like Sebastian and Atticus favors ancient Ignatius, too. It’s a boy’s name with plenty of sound and syllables.

And the baby name Ignatius combines some appealing qualities. It’s a serious, substantial choice. But it also offers a range of great nicknames. And that meaning – fiery – puts this quirky traditional on the list of baby boy names that could appeal to parents looking for a mix of spirit and strength.

What do you think of the baby name Ignatius? 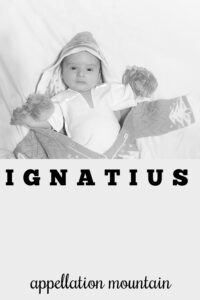 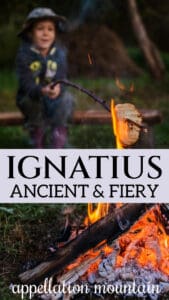