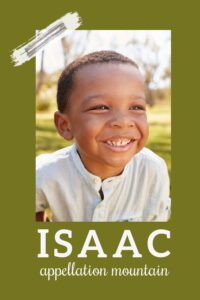 The baby name Isaac combines all the gravity of a Biblical classic with an undeniable cool factor.

This name comes from the Hebrew phrase tzahaq, meaning “he laughs.” Or possibly rejoices.

Either way, it feels like a positive choice for a child, a brother for similarly upbeat names like Felix and Asher.

But there’s more to the laughter than just plain happiness.

In the Book of Genesis, both Abraham and Sarah laughed at the idea of their son’s birth. Abraham was nearly one hundred; Sarah counted as a senior citizen, too. And yet the prophecy came to pass.

Their story continues. At one point, Abraham thought he would be forced to sacrifice his only son. Not so. Instead, Abraham became, as his name implies, the father of multitudes.

The father and son’s story is cited in the New Testament and the Quran. No surprise, then, that versions of this name are found over the centuries in many different languages and cultures.

A handful of saints answer to the name, from the ancient world into more recent times.

In English, the baby name Isaac returned to widespread use during the Reformation, one of the many Old Testament names embraced by Protestant parents.

Notables by the name appear from the sixteenth century onward, including:

Along the way, some of the famous figures lent the name an edge. There’s designer Mizrahi, as well as the frontman of the Fray and the lead singer of Modest Mouse.

But it’s another figure that shapes the way we hear this name: Isaac Hayes.

The current generation of parents might know him best as the voice of Chef on South Park. But long before the Comedy Central cartoon debuted, Hayes was racking up awards – an Oscar, a Golden Globe, and more than one Grammy. He took home the trophies for the soundtrack to 1971’s Shaft.

The signer-songwriter-actor’s surname is catching on in recent years. And his first name? Undeniably icy-cold cool.

With all this history, it comes as no surprise that Isaac has never left the US Top 400.

In fact, it’s been steadily used over the years, hitting a low in the 1960s, but rebounding starting in the 1970s.

But in recent years, Isaac has transformed from quiet classic to style star.

While no nickname is required, the baby name Isaac shortens to Zac and Ike.

Maybe Hayes gets credit. Maybe it’s the authentic, but unconventional double-a spelling. Or perhaps it’s simply the appeal of name every bit as traditional as John, but not nearly as familiar.

Regardless of why, we know that the name currently stands at #39 in the US, down a bit from a peak of #28 in 2013, but still powerfully popular.

If you’re after an enduring Biblical boy name that feels fresh and modern, the baby name Isaac might belong on your list.

What do you think of the baby name Isaac? 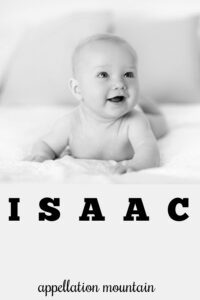