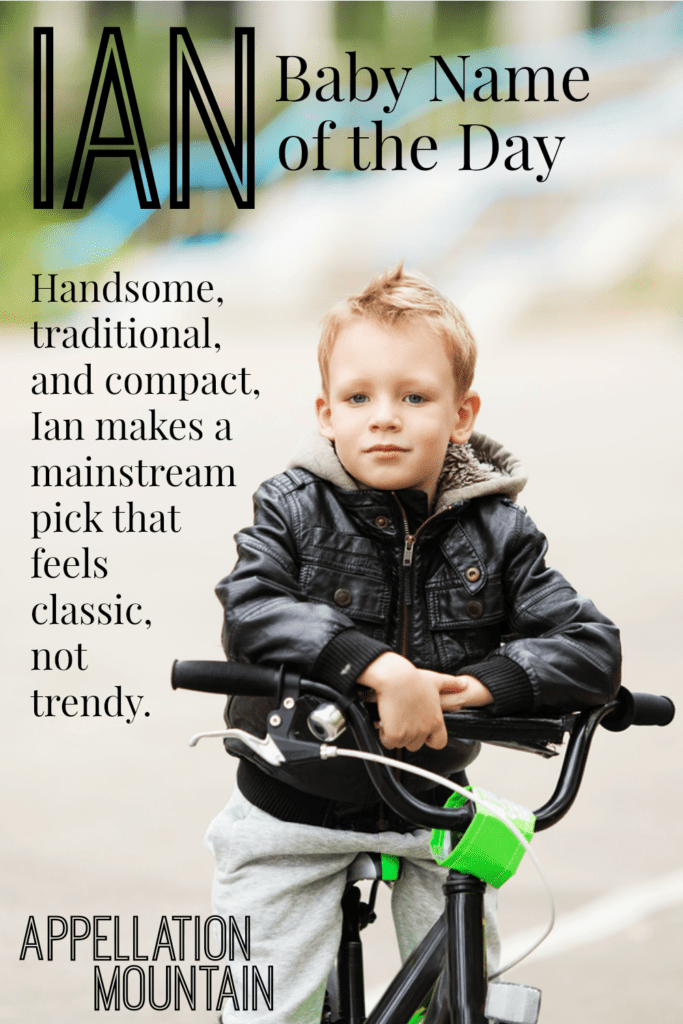 Ian fit the mini name trend ages before we all fell for Jax and Kai.

Our Baby Name of the Day takes its inspiration from Jessie’s grandfather.

Count this name among the many international variations of John.

Along with Evan and Sean, it ranks among the most familiar forms of the name. It feels more wearable in English than the Russian Vanya or Portuguese João.

How do John and Ian connect? The name started out as Iohannes in Biblical Latin. Swap the I for a J, and Johannes gives us John and company. The Gaelic Eoin evolved from Iohannes. The Scots whispered Eoin into Iain. Iain was slimmed down by one more ‘i’ over the years.

It remains common in Scotland, though another cousin – Jack – tops the charts there.

The name soared in the UK earlier than in the US. That’s why many of the best known bearers of the name hail from across the pond, including:

Add in plenty of athletes, politicians, scientists, and a British war hero or three, and this starts to feel like an ordinary name that stops short of being a regular Joe.

Fictional characters have appeared on EastEnders, as well as My Big Fat Greek Wedding, Pretty Little Liars, and more.

No one argues that Ian stands alone, a complete name with a long and storied history.

But it also falls at the end of many a stylish name. From the current US Top 100, four names end with -ian: Sebastian, Christian, Julian, and Adrian. Few of them reduce to Ian naturally, but all of them feel like modern staples.

Credit some of this name’s appeal to our affection for the general sound and spelling. It feels on trend – but stops short of trendy – today.

The name appeals for another reason. It makes a short name, like fresh discoveries Gage and Kai. But it boasts almost as much history as Henry or James. That puts him in the company of mini names like Max and Ray and Eli. They may seem short on letters, but they’re big on style.

Overall, this name serves as a solid, sensible pick for a son. It nods to Scottish heritage, while remaining perfectly mainstream. We recognize it instantly, but it never feels over-exposed. Fleming makes it dashing; McKellen lends it creative force.

If you’re seeking a stable name for a child that maintains plenty of style, Ian belongs on your list.

What do you think of Ian?

This post was published originally on February 16, 2012. Following substantial revision, it was reposted on March 15, 2017.