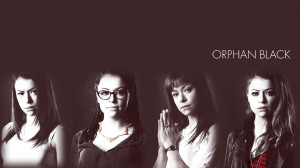 Are you watching Orphan Black?

I’m not sure if we’re friendshind in the US, but on BBC America we’re midway through Season Two.  I’ll try to do this post without spoilers – but oh my goodness, there are so many plot twists, it is challenging!

Here’s the basic brief: a top-secret experiment created clones, who grew up unaware of their origins.  Now things are … complicated.

And, oh – the names!  At the beginning of season two, we’ve met nine clones, plus the characters surrounding each of them, and a few others have been mentioned briefly.

It’s easy to be dismissive of sci fi as a source of name inspiration.  For every space age oddity or out-there invention, there are lots of names that just plain work.  Think of Joss Whedon, arguably one of the best namers in television.

If Xander and Willow can come from a television show about vampires, what could come from a series about clones?

Each of the clones grew up separately, and while they’re all played by the super-talented Tatiana Maslany, they have their own backstories and quirks.

Elizabeth, Beth – The cop – whose suicide sets the events of the series in motion.

Helena – Raised by nuns in a Ukrainian orphanage, and a villain early days.

Katja – The German clone – we only meet her briefly.

Rachel – The clone we meet at the end of the first season.

Sarah – Streetwise Sarah is the clone at the center of everything.

The Others: Women from Orphan Black

Amelia – A woman from Sarah’s past, one who ties Sarah and Helena together.

Astrid – A blonde assistant to Olivier.

Aynsley – The equally Stepford-esque neighbor to Alison in the ‘burbs.

Bonnie – At first glance, she’s as wholesome as her name implies.

Delphine – A scientist and girlfriend to Cosima.  Cosima calls her Delphi – like the oracle.

Gracie – Daughter to Henrik and Bonnie.

Kira – Sarah’s daughter, the child she’ll do anything to protect.  It’s a fascinating name choice – spelled Ciara, it can come from the Irish – black, dark.  But it can also tie to Cyrus – far-sighted – or the Italian Chiara – from Clara, light.

Leda – Not a character, but the name of the project that may be responsible for the clones.

Meera – One of Alison’s neighbors in the ‘burbs.

Siobhan – The foster mother of Sarah and Felix, usually referred to as Mrs. S.

The Others: Men from Orphan Black

Aldous – How’s this for a genius name?  The head of the Dyad Institute of all things biotech is a scientist named Aldous, as in Huxley, as in Brave New World.

Arthur – The police detective partner of Beth.  He’s both brave and loyal – and very deserving of his name.

Cal – Someone from Sarah’s past.  No word – yet – on whether Cal is short for something.

Carlton – Someone from Mrs. S.’s past.

Henrik – I want to like this spin on Henry, but Henrik is not exactly a likable character.

Olivier – One of the Dyad Institute’s henchmen.  We eventually learn that Olivier Duval is an assumed name – he was born plain Kevin.

Paul – Beth’s boyfriend, and a big part of the story.

Raj – A tech at the police headquarters who helps Sarah early days.

Are you watching Orphan Black?  Which names are your favorites?  Are there other television shows with great names that should be profiled?