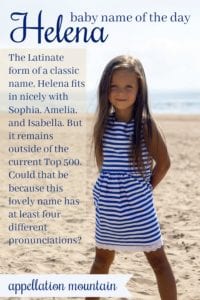 Helena sounds romantic and classic, and best of all? It’s relatively underused.

A century ago, it was just Helen – hold the ‘a’ – that dominated American baby naming. It came second only to Mary from the turn of the twentieth century right through the 1910s.

Ellen, Elena, Lena, Elaine, Ilona, and Nell all appear on the same family tree. A crooked line stretches over to Eileen and even tangles up with Eleanor. Many of those names have routinely outranked Helena. In the 1950s, Helen, Ellen, and Elaine all appeared in the US Top 100, as did Eileen. Today, it’s Elena most in favor.

Helen comes from a Greek word meaning torch, or bright. It might have been influenced by moon goddess name Selene, too.

Way back in the fifth century BC, Euripides penned Helen, telling of the staggeringly beautiful daughter of Zeus and the mortal Leda. Her face would launch 1,000 ships – otherwise known as the Trojan War.

Whether the given name was common throughout the next few hundred years is difficult to say, but there is a Queen Helena of Adiabene in Mesopotmia around the year 30.

Another woman by the name gave birth to a rather famous son: Constantine, the Roman Emperor famed for ending the Diocletian persecutions and declaring religious toleration in the 300s. She’s considered a saint.

The saint inspired plenty of parents throughout the following centuries.

Geoffrey of Monmouth popularized Arthurian legend back in the twelfth century. He claimed her for England, making her a princess from Colchester. This is almost certainly pure fancy, but it led to many girls called Ellen – the popular Anglicization of the name in medieval England.

It’s also the form chosen by Shakespeare twice. He gives the name to one of the young lovers in A Midsummer Night’s Dream. Helena is the clever would-be-bride at the center of All’s Well That Ends Well, too.

Queen Victoria named her fifth child Helena Augusta Victoria. There have been royals named Elena and Helen, too. And in Victorian England, Helen was the most common form. Perhaps Prince Albert’s German roots influenced the name’s style; her nickname was the very Germanic Lenchen.

Either way, the literary and regal roots make this form of the name feel especially English.

Americans also probably think of London-born actor Helena Bonham Carter. She’s the daughter of an Elena and granddaughter to a Helene. She named her daughter Nell.

And one more: E! original series The Royals gave this name to their fictional dowager queen, played by Elizabeth Hurley.

Helena: By the Numbers

Despite lagging behind other forms of the name, Helena has appeared in the US Top 1000 every year except one. That’s enough to qualify as a classic.

Credit for the name’s reversal seems to go to Ms. Bonham Carter. As she transitioned from rising indie star to full-on celebrity, her given name rose in use.

And yet, it still remains outside of the current Top 500. That could represent an opportunity, but it also raises the question: in our age of Isabella and Sophia, why is this name so overlooked?

There’s HEL en ah, he LEN ah, he LEE nah and he LAY nah. And I’m not sure that captures them all!

Your preferred nickname might inform the pronunciation you like best. Laney, Nell, and Lena all suggest a different sound.

Or maybe it depends on your roots. You might hear this name across much of Europe, but it sounds different in Oslo than in Warsaw, and it’s not said the same in Brussels and Berlin. The capital of Montana takes a specific pronunciation; but it’s not necessarily the same as the dozen or more other places with the same name.

Helena: Traditional With an Edge

Maybe it’s because this name remains rare. Credit could go to the actor. Or maybe it’s other factors, like the 1993 twisted horror story Boxing Helena, the gory love-gone-wrong song by The Misfits, or the Goth-pop hit by My Chemical Romance. But somehow traditional and storied Helena feels like a name with a little bit of an edge.

If you can settle on one sound – and don’t mind correcting others – it might be the perfect stands-out, fits-in choice.

So tell me: how do you say Helena? And would worries about pronunciation stop you from using this name?

Originally posted on August 11, 2008, this post was revised substantially and republished on September 26, 2018.