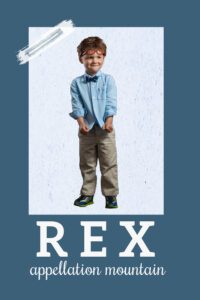 The baby name Rex fell out of favor in the 1990s. But today, this regal vintage gem might be prime for revival.

Thanks to Lola for suggesting our Baby Name of the Day: Rex.

Even without Latin 101, we all know that Rex is the Latin for king.

Not exactly a cuddly combination.

The king of Rome – a titled that pre-dated the Empire ancient days – was known as the Rex Romae.

This puts the baby name Rex in the company of regal picks like Kingsley and Reign. But while those are modern favorites, seldom heard before the twenty-first century, Rex has centuries of use.

The only hitch? A great many of those famous uses were for dogs.

But there’s a noble backstory.

During World War II, a British search and rescue dog named Rex received the Dickin Medal – the highest honor given to animals serving in war.

To Americans, however, the most famous canine Rex might’ve moved into the White House with Ron and Nancy during President Reagan’s term. A Cavalier King Charles Spaniel, Rex performed a number of official duties, including helping to light the National Christmas Tree.

While the 80s are long gone, Rex was famous in his day.

There’s a sheepdog from the pig flick Babe called Rex, as well as the claymation pooch starring in Rex the Runt.

Combined with plenty of other dogs by the name, it’s enough to explain why some hear it and think canine.

Except Rex the dog was likely named for a long-serving White House staffer.

Hollywood star Rex Harrison is probably best remembered for playing Professor Henry Higgins opposite Audrey Hepburn in My Fair Lady. He earned an Oscar for the part in 1964. And he’d previously won a Tony Award for playing the part on Broadway.

But Harrison’s career spanned five decades, including television and radio as well as stage and screen. He lends the baby name Rex a mix of leading man dash and subtle British charm.

While Rex has been in steady use across the generations, most of those men suggest someone north of forty, if not far older.

And that’s accurate – but a handful of pop culture uses have shifted the baby name Rex younger.

One notable use: the nervous dinosaur in the Toy Story movies. Voiced by actor Wallace Shawn, Rex has appeared in all four movies, beginning in 1995.

That’s an entire generation, now all grown up, who find Rex right at home in a playroom.

There’s one more use that might come to mind.

In New Orleans, Rex is King of Mardi Gras.

The annual celebration features parades with massive floats. They’re organized by krewes – local civic organizations that both parade and support various charitable causes in the community.

Rex is the oldest, organized by local businessmen way back in 1872.

The krewe’s parade is the highlight of Mardi Gras, and Rex’s role is to receive the key to the city from the mayor and then lead the traditional ball. It’s considered a significant honor, one earned after many years of service to the community.

Yet another reason to hear the baby name Rex as royal.

That’s pre-peak Rex Harrison, but right around the time Rex Allen appeared on screen as a cowboy in a series of Westerns. Not only was he on screen, but his character’s name in many of those films?

It makes the baby name Rex surprising flexible. At home on the range … or having tea with the queen.

The pair of famous Rexes probably kept the name in use for a dozen years or so, but it steadily fell out of use. It left the US Top 1000 entirely after 1998, and in the year 2000, just 112 boys received the name.

The baby name Rex didn’t languish in obscurity for long.

Though, with such a long history of use, the baby name Rex might be more like Felix or Dexter than Huxley or Dax.

That’s not exactly Liam, but it’s moving in the right direction.

If you’re after short, complete, strong, and not-too-common, the baby name Rex might belong on your list.

What do you think of the baby name Rex? 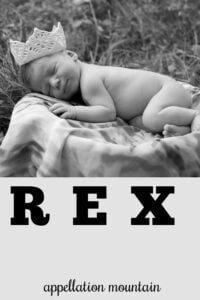