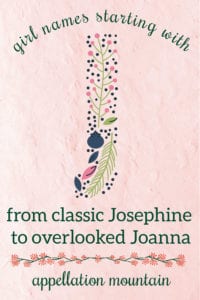 When it comes to girl names starting with J, we all know a Jennifer or a Jessica.

Maybe three of each.

But they weren’t the first wildly popular J names, not by a long shot. Joan had a good run. Julia, too. J names for girls been favorites for ages.

At the moment, though, it’s only the eighth most popular initial for girls. (For boys, it comes in at #1.) Still, plenty of J girl names are rising, and it’s hard to imagine a Top 100 without at least a J name or two for our daughters.

Elegant and spirited, Josephine fits with favorites like Katherine and Charlotte. And it’s following both of those favorites straight up the popularity charts.

A name with ancient roots, Julia has ranked in the US Top 100 since 1980. It’s actually falling now, but remains a traditional favorite.

A colorful gemstone name, we started naming our daughters Jade after a celebrity baby – Mick Jagger’s daughter, born way back in 1971. It fits with so many current trends, from word names to colorful choices.

One of the few Disney princess names to reach the US Top 100, we often credit Agrabah for the name’s success. But the 1992 animated feature gave their princess a name that was already rising dramatically. This floral favorite remains in heavy use.

A Josephine nickname, Josie stands on its own – just like Sadie and Hattie.

Jordan – as in Michael – became a 1990s favorite for boys and girls alike. Not only did the NBA legend inspire parents, but the Jordan River in the Holy Land has been borrowed as a given name since the Crusades. The Jordan spelling remains in the Top 100 for boys, but we seem to have settled on Jordyn as the feminine form.

An elaboration of Julia in the key of so many long names for girls.

Shakespeare’s Juliet started to trend early in the 2000s. But it has since been surpassed the Juliette, with an extra -te added.

A bouncing and spirited nature name, Juniper debuted in the US Top 1000 in 2011, and hasn’t slowed down since. It sounds like a logical successor to Jennifer, with a healthy dose of traditional June.

Some will argue that Jocelyn has masculine roots, and that’s true – but so far back in history that few are aware. Instead, Jocelyn peaked in the twenty-first century, a tailored name in the key of Allison and Madison, Evelyn and Madelyn.

A tropical flower, Jacaranda is seldom heard as a given name, but picks up on Lily, Rose, and Jasmine.

Actor January Jones put her unusual given name on parents’ radar. Jones was named for a character in a novel.

A musical possibility for girls that owes a little something to the success of Jasmine.

A glittering word name made famous by Grammy-nominated singer Jewel and her now-famous Alaskan family.

A spiritual word name – or maybe a tribute to a wildly successful 1980s band.

A mini name with an ebullient meaning, Joy has long been used as a given name for girls in the US. Disney-Pixar’s 2015 Inside Out gave the name a tiny boost.

Another joyful name, Jubilee also has comic book ties, thanks to the X-Men.

A month name with a long history of use as a first, classic June has more in common with Rose or Grace than Jazz or January.

A Spanish form of the flower name Hyacinth, Jacinta and Jacinda seem more accessible in English.

It looks like a mash-up of Jennifer and Jessica, but Jenica has Romanian roots, too.

An Old Testament rarity that fits right in today.

An older form of Jasmine, elaborate and lovely.

Traditional Judith was a Top Ten favorite in the US circa 1940. Today it feels traditional and overlooked, an obvious alternative to Eleanor.

Legendary Mexican singer and actor Julissa was born Julia Isabel. This elaboration feels like something just a little different in our age of Juliette.

A bright and energetic goddess name, Juno feels like an update to gentle June.

Justin ranks in the boys’ Top 200 and has for years, while feminine form Justine remains overlooked.

In German, Dutch, Slovak, and other languages, John becomes Jan. Add an ‘a’ and you’ll arrive at Jana.

Austen makes Jane impeccably literary. That’s just one of many reasons it counts as a classic.

A nickname for Jane dating way back to the Middle Ages, Janet became a go-to choice for American parents from the 1920s through the 60s.

Likely created for a novel, Janice has faded since the middle of the twentieth century, but odds are this name will (eventually) stage a comeback.

From heroic and saintly Joan of Arc to controversial Hollywood icon Joan Crawford, this name has history to spare. A Top Ten favorite in the 1930s, it’s been rarely heard as a child’s name since the early 1990s.

Adding an ‘a’ is a time-honored way of making a masculine name feminine. So why not Johna? Or is it Jonna?

In Serbian, Jovan is John; that makes Jovana the logical feminine form. Jovanna might owe a little something to Italian Giovanna, too.

Jeanne is the French form of Jane and Joan. (Jean is their equivalent of John.) It’s about as traditional as it gets; Joan of Arc is Jeanne d’Arc in French. American parents embraced it for much of the twentieth century, but today it’s lingering in obscurity.

The Spanish equivalent of Jane and Janet, Juana and Juanita are, just like many of the feminine forms of John listed here, not terribly common in the US today. But they’re instantly recognizable picks.

THE MOST CONTROVERSIAL J NAME FOR GIRLS

No list of girl names starting with J is complete without a mention of James.

While it’s deeply controversial, more parents have considered James for their daughters in recent years. It’s become something of a go-to middle. Sometimes, as with Blake Lively and Ryan Reynolds, it’s a family name.

What are your favorite girl names starting with J? 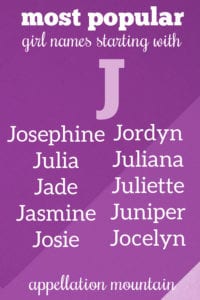