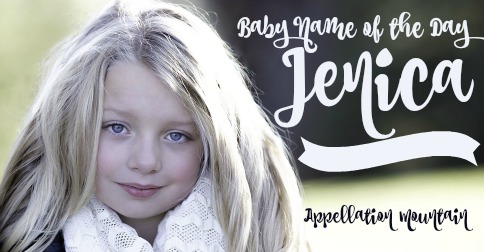 Thanks to Jennica for suggesting her own name as our Baby Name of the Day.

The easiest explanation for Jenica is that it’s a mash-up of the #1 name from the 1970s,  Jennifer, and her successor, Jessica.

The numbers bear this out: Jenica peaked in 1981, when the name was given to 94 girls. The Jennica spelling reached its zenith a few years later, when 78 girls were given the name in 1987.

Even without the popularity of Jessica and Jennifer, the -ica ending has been familiar for girls over the years. Erica, Monica, and Veronica have all enjoyed popularity, and there are many others that have enjoyed some use. 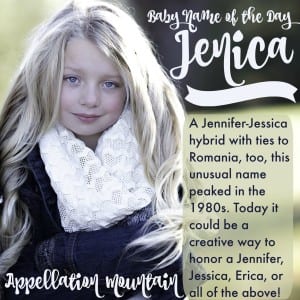 But before we dismiss Jenica as a nouveau smoosh name, here’s a twist: it’s sometimes listed as a Romanian feminine form of John.

Is it true? Maybe. There have definitely been Romanian girls given the name, but I’ve found a few in other countries, too. There’s a Filipina actress named Jennica Garcia; a Finnish ice hockey player; and a character in an Australian YA sci fi novel.

Actress Jenica Constantinescu appeared in a Romanian movie called The Protar Affair. The movie is notable for its entry into the 1956 Cannes Film Festival.

And yet, here’s why I hesitate to call this a Romanian name: the most commonly listed Romanian form of John isn’t Jens or anything remotely similar. It’s Ioan, with Ioana the feminine form. I’ve also seen Ion and Iona listed.

But these things aren’t always set in stone. Samantha is the accepted feminine form of Samuel, but it’s a relatively new name. And Romania recognizes at least twenty minority languages, from the familiar (German) to the obscure (Ruthenian, Tatar).

Given the history of use, it appears that this can be considered a Romanian name – though I’m not certain how it would be perceived in Romania today.

Jenica reminds me of Jerica – another smoosh name with possible Slavic roots, and ties to 80s pop culture thanks to Jerrica “Jem” Benton, of Jem and the Holograms fame.

They’re all names that never quite caught on in their heyday, which begs the question: are they ready to wear now, or has their moment already passed?

Interestingly, Jenika and Jennika have been most popular in the last few years. The ‘k’ spellings of the names peaked in 2013 and 2014. I found an intriguing used of Jenika in New York State history, as the name of a French aristocrat who immigrated to New York. She’s also listed as Janice. Could Jenika be a product of Dutch influence, where the ‘k’ sound is common in diminutives?

It’s a bit of a mystery, and the most logical explanation for the name’s success remains the popularity of Jennifer and Jessica.

But I do think that Jenica could be a wearable rarity. It’s an interesting way to honor a Jennifer, or another 70s or 80s-born woman with one of the many similar-sounding names. And while it would have been reduced to the ubiquitous Jen during the 1980s, today it would likely be used in full.

It’s an interesting, distinctive sound that could appeal to parents seeking something different.

What do you think of Jenica? Does it seem dated or fresh?