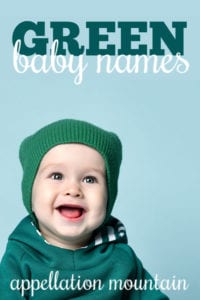 Green baby names feel just right for spring. Or the winter holiday season. Actually, they fit in with the fall harvest and the heights of summer, too.

Borrowed mostly from the natural world, green baby names feel vibrant. Some of these rank in the current US Top 100. Others appeal to lovers of all things vintage. And a few are yet to be discovered.

While green sometimes carries negative meanings – green with envy, or the green of illness – most associations with the color trend positive. We associate the color with sustainability, responsible stewardship, and a better future. Some of these might honor Irish heritage. And, of course, green can signify material wealth, too.

If you’re looking for a colorful name, shades of green work beautifully.

Pioneering aviator and adventurer Beryl Markham completed the first solo Atlantic flight, east to west, in 1936. Her name comes from the pale green gemstone. While it’s unusual today, Beryl appeared in the US Top 1000 from the late nineteenth century into the 1950s.

The dazzling green gemstone combines the appeal of Ruby and all those Em- names. But it teeters on the edge of the US rankings, in some years and out others. That could make it a great pick for parents after a rare-ish name for a daughter.

Fern Arable fights to save Wilbur in Charlotte’s Web. That makes this name literary, idealistic, and heroic, too. One of many nature names first heard in the late 1800s, Fern headed towards obscurity in the 1960s. But our love of all things ecovintage could bring this name back today.

Hazel ranked in the US Top 100 from the 1880s into the 1930s. Today this tree name and color name appears on many parents’ shortlists, propelled by celebrity birth announcements, a popular character from young adult lit, and our affection for vintage nature names. The name hasn’t been this popular since the 1920s.

We love mini names and middle V names, so no surprise Ivy is following Ava up the charts. Ivy brings to mind exclusive universities, the Christmas season, and at least one comic book villain. Speaking of villains, plant menace poison ivy might’ve put parents off this name in generations past. Today, though, Ivy feels nothing but stylish.

As short as Jane, as glittering as Emerald, gemstone name Jade has become a modern staple. But it was seldom heard prior to the 1960s and 70s. Credit goes to the 1971 birth of Mick Jagger’s daughter with model Bianca Jagger. They named her Jade – and she grew up to work as a jewellery designer. It has history as a unisex name, but it’s far more common for girls in the US today.

So many Laura names have been popular for girls over the years, from classic Laura to cool Lauren. No surprise that Laurel has enjoyed some use, too. They all come from the Latin laurus, for the laurel tree. It symbolizes triumph, and fits right in with green baby names, too.

A Japanese feminine name meaning green, Midori spiked in use during the late 1980s. Credit goes to Japanese figure skater, Midori Ito, who wowed the crowds at the 1988 Calgary Olympics, and again in 1992. It might’ve been a big hit, except Japanese distiller Suntory started marketing their lime green liquor in the US around the same time. And wouldn’t you know it? The melon-flavored drink is also named Midori. Still, the given name clearly came first, so if Brandy works, why not Midori?

An edible name, Olive succeeds thanks to two things: first, it’s cousin to the wildly popular Olivia. Second, it’s a vintage favorite, popular at the turn of the twentieth century. Today it feels vintage and just slightly unexpected.

Another name that owes its familiarity to Olivia, Olivine sounds like an invention. But it’s actually a mineral, typically found in a shade of yellow-green. This could make a stunning middle name, too.

Olivine is the mineral, but Peridot? That’s what we call the gemstone form of Olivine. It’s pronounced both with the ‘t’ – per-i-dot – and without, like Margot or per-i-doe. It’s almost unheard of as a given name, but with choices like Ruby and Pearl mainstream, and P names so in favor, Peridot has potential.

Surname name Forrest – as in Gump – tends to be more popular as a given name. But straight-up nature name Forest is heard, too, and works every bit as well as other word names like River and Fox. It feels just traditional enough to lean hippie. And yet, it’s clearly an outdoorsy choice for parents in love with the natural world.

Like many surname names, Hunter feels mainstream today. That helps obscure the name’s ties to the outdoors, as well as the color hunter green. (Which, of course, was favored as camouflage while hunting back in the day.) It sounds rugged and capable, the kind of name that wears well on a child or an adult. Increasingly, it’s used for girls, too – but this name remains overwhelmingly masculine.

Just one consonant away from modern favorite Logan, Loden comes from a thick, waterproof woolen cloth usually made in this shade of green. (The word originally referred to a cloak; eventually it came to mean the color, too.) It’s very rare, but not completely unknown.

Moss rhymes with Moss, and might bring to mind twentieth century playwright Moss Hart. It’s a name that evokes the deep of the forest. As nature names go, file Moss with the gentler choices – less Talon or Wolf, more River or Sky.

I came this close to dropping Celadon from the list of green baby names. Then I realized that Celadon started out as a given name in an early seventeenth century French pastoral novel. The color took its name from the character’s favorite color. So where did that author come up with Celadon? Turns out he borrowed it from Ovid’s Metamorpheses, first published around 8 AD. That’s more history than most of the green baby names!

Clover feels lucky, a modern nature name with plenty of upbeat spirit. It also fits with our affection for r-enders, and while it’s more popular for girls right now, I think it picks up on the best of Piper and Harper – and Hunter and River, too.

If you’re of a certain age, you probably think of Kelly as feminine. After all, it peaked for girls in the 1970s, after late 1950s television series Bachelor Father introduced a (female) character by the name. But it’s originally an Irish surname, and I think it feels fresher for a boy today. The numbers agree; while it’s falling sharply for our daughters, it’s holding steady with more than 100 boys receiving the name Kelly in each of the last several years.

Sage means wise. Or it refers to a color. Or an herb. All good references, I think. This name feels truly unisex, used in steady numbers for boys and girls alike. It seems particularly pleasing as a modern middle name alternative to John, James, Rose, and Grace. But it wears well as a straightforward, nickname-proof first, too.

Sea sounds just like the letter C, which could be a barrier. Except we’ve met plenty of people named Jay and Kay. Water-related names, like River and Ocean, feel particularly meaningful for many parents. Plus, the sea symbolizes so many things – a mix of relaxation and adventure, daring journeys and quiet summer afternoons. As with Sage, it’s a great unexpected middle. But it has plenty of potential as a first, too.

Teal has referred to a kind of small duck since the 1300s. The color comes from patterns on the duck’s head and wings. Despite the clear connection, it’s not well known – in fact, the color is far more familiar than the waterfowl to most. The color is a dark greenish-blue. It sounds just enough like a name to be an option for a child born today.

Those are my picks for the best green baby names. What would you add to the list? Would you consider any of these for a child? 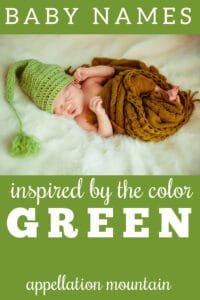 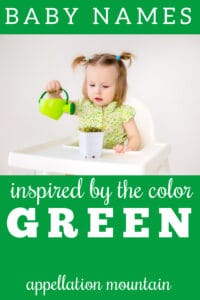