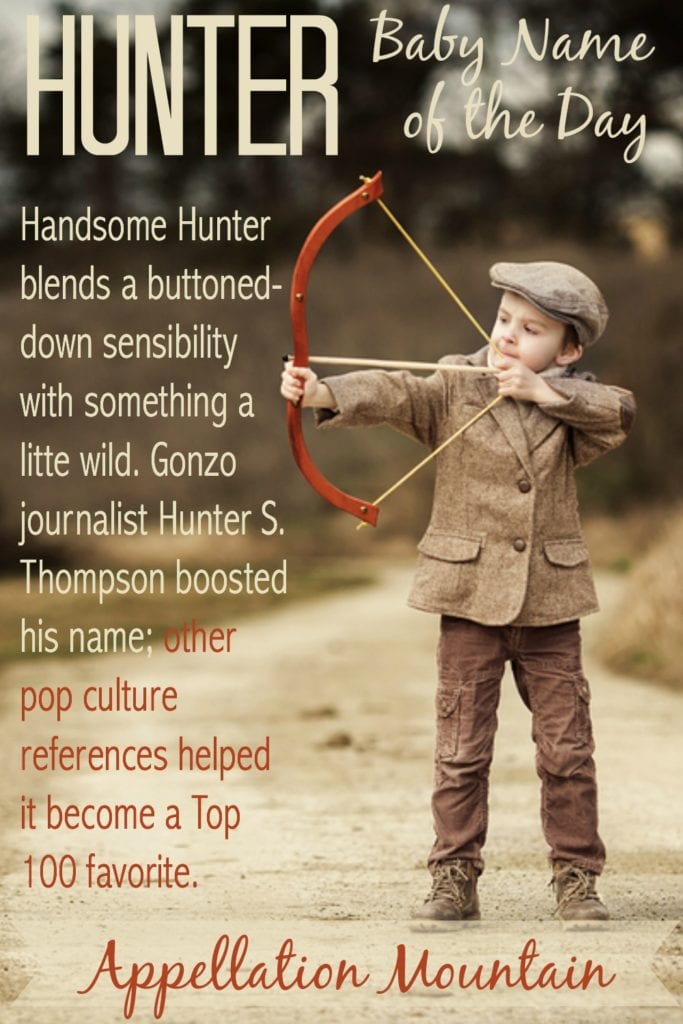 Top 100 month continues with our Baby Name of the Day.

Hunter: Noble and Not

We think of hunting as an aristocratic pursuit, all horses and hounds. But the surname could apply to anyone involved with the fancier version of the hunt, or to someone putting food on the table in a humbler fashion. Catching small birds and animals with traps and snares counts as hunting, too.

Regardless, it became a very common surname. Like many a surname, it often was promoted to the first spot.

You might think of journalist Hunter S. Thompson. Born in 1937, his unusual given name came from a distant family member.

Thompson helped invent what he dubbed gonzo journalism – reporting on a story by becoming part of the tale. The writer’s adventures included living with a motorcycle gang and chronicling the Kentucky Derby. His most famous work, Fear and Loathing in Las Vegas, focused on the counter-culture movement of the 1960s.

During the 1970s, the name slowly gained in popularity. That seems to track with the success of Fear and Loathing.

By the time the big screen adaptation starring Johnny Depp as Thompson was released in 1998,

Famous bearers of the surname and pop culture references abound, like songs by Blondie and Dokken. The late 1980s also gave us Hunter Tylo, an actress who transformed her common surname into an unexpected given name.

And yet, it’s easy to find more enduring associations for the name.

It brings to mind the constellation Orion, as well as many figures from world mythologies.

While hunt can carry aggressive, even violent associations, not all hunting is bad. We can hunt truth or treasure. We can search for something tirelessly. There’s a hint of virtue name about this one, if only you think of synonyms for hunt, like seek, chase, or pursue.

Hunter: Top of the Charts

The name entered the US Top 100 in 1993, and has yet to leave. It’s not just about meaning anymore. Hunter sounds like a mainstream pick for a son in 2016.

Tyler became a Top 100 favorite for boys in the 1990s. Tanner, Taylor, and Parker all fared well. By the 2000s, Carter, Cooper, and Spencer were all trending.

While you might meet a few girls with the name, this has become a solid choice for a son born today. It’s less classic than Henry, but not as out-there as Wilder.

Speaking of Wilder, if you’re disappointed that this name is so common, this list of preppy hellraiser names might be for you.

And yet, Hunter still wears well today. It feels outdoorsy and rugged, but also refined – a combination that makes for a versatile choice.