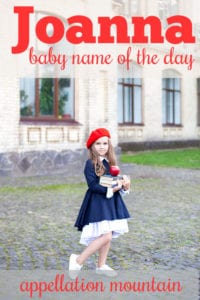 Joanna qualifies as regal, midcentury, romantic, dated, and ready for revival all at once.

Thanks to Katherine for suggesting one of 2019’s Trending Traditionals as our Baby Name of the Day.

File John among the most impeccably classic names for boys. It’s Hebrew, meaning God is gracious. And as it’s traveled from Hebrew to Greek to Latin and then into vernacular languages across Europe – and beyond.

Feminine forms of the name evolved at a steady pace. There’s Jane and Joan and Jeanne; Giovanna and Ivana and Janelle. Mixed in there, from early days, you’ll find Joanna, along with Johanna and similar spellings.

Odds are the name developed more than once over time. The Latin Iohannes became Iohanna, which quickly dropped the middle ‘h’ and substituted a J for the I. Suddenly, it’s the name we know today.

But during the Middle Ages in England, the favored feminine form of John would’ve been Joan. It was wildly popular into the Tudor era. At the time, given names were often formally recorded in Latin. Helen became Helena, for example. And Joan? Became Joanna.

In the New Testament, the name belongs to the wife of an important court official. The Gospel of Luke tells that Jesus cured her of an affliction; she later witnesses the empty tomb. Because of this latter status, you may hear her referred to as a Myrrhbearer.

But the history books really bulge when it comes to royal women with the name, beginning in the 1200s.

By the fourteenth century, there’s a Queen of Naples by the name – though she’s also sometimes listed as Giovanna.

During in the same era, Joan of Navarre married King Henry IV and reigned as Queen Consort of England.

More famous still, Joanna the Mad inherited the crowns of both Castile and León in the 1500s. While she was considered intelligent and capable in her youth, it’s not clear what happened after her marriage. Perhaps she really did exhibit signs of schizophrenia or another disease. Or maybe it simply became convenient for those after her power to claim it.

The most fascinating of the royal Joannas might be Begum Samru. Born in India in the 1750s, with the birth name Farzana, she grew up poor. Farzana made her name as a dancer, eventually headed a mercenary army, and ended up building castles as ruler of Sardhana, with the title Begum. So where does Joanna come in? She converted to Catholicism as an adult, and that’s the name she chose, eschewing Farzana for Joanna … even though she’s almost exclusively known by her title.

It’s big in Poland, a steady Top 50 name for over a decade.

But in the US, the picture is a little different. While it’s always appeared in the US Top 1000, it was relatively rare until the 1950s.

Johanna actually ranked higher in the late 1800s. But the situation has flipped, and the ‘h’ spelling has trailed for decades.

It’s Joanne that fared best. After not appearing in the Top 1000 at all, it debuted in the early twentieth century, and made the Top 100 from the 1930s straight through the 1950s. Today, though, it’s out of the rankings entirely.

By the 1960s, it was the slightly different Joanna inching up the popularity charts, and for that, credit the radio.

In 1964, Tony Bennett recorded “When Joanna Loved Me.” I’m not sure if it counts as a hit, but Bennett performed it often over the years, and lots of other famous singers recorded and performed it, too.

In 1980, we met Jo Polniaczek, one of the main characters in soon-to-be hit sitcom The Facts of Life. (Jo first appeared at the start of season two, which is when the series really took off.) Her full name? Joanna Marie.

And then Kool & the Gang released their chart-topping single “Joanna” in 1983. I can almost guarantee you’ve heard it.

The name spiked immediately, spending the next two years in the US Top 100 – its most popular years, by far.

Despite the strong ties to the 1980s, this name doesn’t feel as tied to the decade as Jessica, Jennifer, or even Nicole.

And because it’s a feminine form of John, as well as a New Testament name, there’s something downright classic about Joanna.

Or could it be that we’re all about Jo names, with Josephine rising quickly?

I’ve called it a Trending Traditional, along with names like Diana and Vera.

If you’re looking for something familiar, but not too popular, this could be the name for you.

Do you think Joanna is ready for revival? Do you like it better than Jane or the other feminine forms of John? 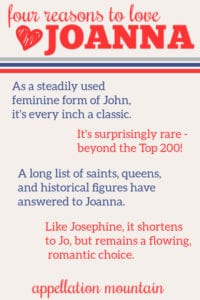