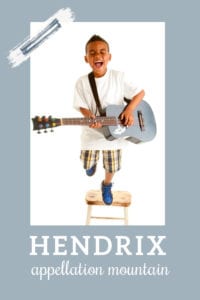 The baby name Hendrix feels like the next Jackson.

The popular classic started out as a Germanic name – something like Heimrich. Then the Normans imported it to England.

The British embraced it. Many of their monarchs answered to the name, including the much-married Henry VIII.

It’s found in nearly every European language, from Enrique to Henri, so no surprise that surname forms abound, too.

But what it really is, is pure rock and roll legend.

Johnny Allen Hendrix was born in 1942 and grew up poor. He taught himself how to play the guitar starting with a broken-down ukulele with only one string remaining. From there, he went on to record some of the most legendary guitar work the world has ever heard.

We know him as Jimi. That’s partly because his parents legally changed his name to James Marshall Hendrix in 1946, choosing family names to honor departed relatives.

He became a sensation after the Monterey Pop Festival in 1967 and headlined Woodstock in 1969, all before his tragic death in 1970. His songs – from “Hey Joe” to his rendition of “The Star-Spangled Banner” are unforgettable. All these years later, many still consider him the greatest guitarist of all-time.

This makes the name distinctively rock and roll and lends it a touch of Americana, too.

Plenty of other notables have answered to the surname, including politicians, authors, and athletes.

If you follow the X-Games, you may have heard pro skateboarder Neal Hendrix as a commentator. It was also the name of an nineteenth century Methodist church leader, for whom Hendrix College in Arkansas is named.

The mascot – a husky dog – for the University of Washington Tacoma answers to Hendrix, too. While the rock star is not officially given as the reason for the mascot’s name, Jimi was born in Seattle.

This name was used in very small numbers all along, mostly for boys. That’s true for so many surnames, occasionally promoted to given name status.

In 2001, there were a mere ten newborn boys given the name.

It wasn’t just our growing affection for rock-inspired surname names. Hendrix picks up on a second, and perhaps even more powerful trend. It’s an x-ending name for a boy. That makes this name part-Presley, part-Felix.

Despite so much celebrity buzz, ties to the classic Henry keep this name rooted in tradition. But the edgy sound, especially thanks to that ending letter X, puts this name on the right side of edgy and cool, too.

What do you think of Hendrix? Would you consider it for a son? 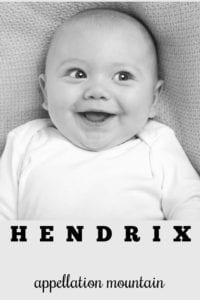