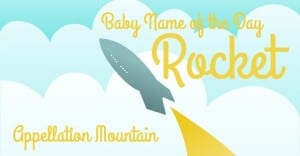 Is this an out-there celebrity baby name, or a modern virtue pick that signals achievement?

Our Celebrity Baby Name of the Day is Rocket.

Australian actor Sam Worthington and wife Lara Bingle welcomed a son named Rocket Zot in March 2015. They’re not the first to choose the name, and Rocket has made crazy celebrity baby name lists before. But Lara lashed out at a journalist who criticized her son’s name, explaining that Zot was her late father’s nickname. I can’t find an interview where she discussed Rocket specifically.

Pharrell Williams – another high profile celebrity with a son by the name – did offer an explanation for why he and wife Helen Lasichanh made the choice in an interview with Oprah.  More on that later.

There’s one more famous family that includes a Rocket. Director Robert Rodriguez and ex-wife Elizabeth Avellan are parents to Rocket, Racer, Rebel, Rogue, and Rhiannon. Their eldest was born back in 1995, so the Rodriguez family was way ahead of the trend!

Rocket: To the Stars! 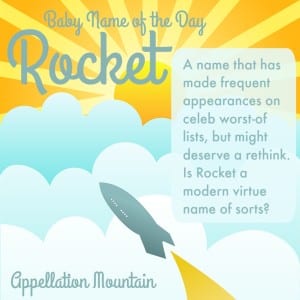 Before it was a celebrity baby name choice, rocket was simply a word. It comes from the Italian rocchetto, originally a word for a spindle, because of its shape.

In many ways, it’s a very twentieth century word. It first appears in the modern sense in Popular Science magazine in 1927 – less than one hundred years ago!

We’ve only been snarking, “It’s not rocket science” since the 1980s. (Apparently, up until then, we’d say, “It’s not brain surgery.” More on the phrase here.)

Of course, rockets themselves aren’t new. They were used during the Napoleonic Wars, as well as the War of 1812. Francis Scott Key famously wrote of “the rockets’ red glare” during the Battle of Baltimore in 1814, and now we sing about them in the United States’ national anthem.

The concept is even older. The Chinese were using them for fireworks by the 1200s, and possibly earlier. Today we tend to think of rockets as heading to the moon, even though the spacecraft of today have evolved considerably.

Jules Verne and HG Wells imagined it. Scientists worked to make it reality, including engineer Robert Goddard. Goddard would go on to build and launch the first liquid fuel-powered rocket. His work was dismissed and mocked by the mainstream media, but ultimately ushered in the Space Age. Today the Goddard Space Flight Center is one of NASA’s major research facilities.

The technology is still used in weapons, but we tend to use different words, like missile, in those contexts.

None of this exactly translates into a baby name, does it?

But in Pharrell’s Oprah interview, he explained that the name had two meanings. First, it was a nod to songs written by Elton John, Stevie Wonder, and Herbie Hancock.

It’s also a modern virtue name. Pharrell compared it to the Native American practice of naming children after a force, animal, or element. Only this name is a “man-made machine that’s mean to go up, meant to ascend.”

Could Rocket be a modern virtue name?

Oprah agreed that a child with this name is a “kid who is born to soar.”

What do you think of Rocket? Do you think it counts as a modern virtue name, or does that only work for Pharrell?