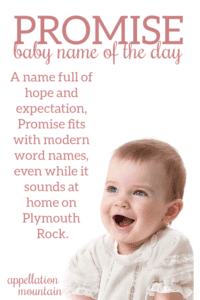 Promise sounds like something from Plymouth Rock, but it’s actually one of the newest girl names of the moment.

Some words prove elusive, their exact origins lost to time.

But this one? We can trace it to the Latin promissum. It became promesse in French around the 1200s, and had arrived in English about a hundred years later.

It’s meant a pledge or vow for centuries.

Pilgrims, Pop Culture or Something Else?

It sounds like the kind of name the Pilgrims would have favored on Plymouth Rock, but I don’t see it on their lists. (Which is not to say it wasn’t used, or perhaps at least considered suitable. After all, Remember made the cut, as did Humility.)

Another possibility: could it come from Africa? In countries with English-speaking populations, word names like Blessing are heard with some frequency. Once again, it’s possible … but I can’t find any evidence.

Pop culture? Maybe. But I can’t find one. Well, there’s a make-up artist who posts crazy amazing, wait-how-did-she-do-that videos on YouTube. (Seriously. Here she is turning herself into Elsa from Frozen. And that’s nuthin’ compared to some of her transformations.) But this does not lead to a wave of girls with the name.

The Steady Rise of Promise

Instead, this name simply gained in use, year over year, thanks to so many similar choices.

Looking at the numbers, it debuted in the US popularity data in 1975, when five girls received the name. That’s the same year Destiny and Harmony cracked the US Top 1000.

By the early 2000s, around 100 girls received the name annually. No surprise, as we were entering the golden age of word names. In 2004, parents loved Cadence and Liberty and Serenity, Patience and Genesis and Grace.

It feels rich with meaning, too. Some might see it as spiritual; others, as a secular virtue. With boy names like Bodhi and Shepherd on the rise, Promise fits right in.

Plus, the letter P helps, too. Piper, Penelope and Paisley are Top 100 favorites, with names like Peyton and Poppy also attracting plenty of attention.

All together, it’s a formula for a wildly successful name.

The word appears in dozens of song titles, and countless lyrics. When in Rome’s “The Promise” from 1988 popped into my head first, but there’s Wiz Khalifa and Radiohead, and that just scratches the surface.

Factor in poetry and literature, and there are even more references.

And the movies gave us 2016’s The Promise, starring Oscar Isaac. It’s a heavy historical drama, but it’s also a high profile use. Other films have also used the word in titles.

In other words: you could hear this name anywhere, because it’s a word in daily use.

Some virtue names feel terribly specific. Others might wear awkwardly. Imagine being named Patience but having a famously short fuse. Or answering to Courage when you’re quiet and shy.

A clumsy Grace doesn’t have it so bad. We all think of Grace as more name than word, and so it’s only sometimes challenging. But the less common a virtue as a name, the more we’ll notice the mismatch.

It’s also true that it can be heard as Christian, a religious name relating to God’s promises to his people. Or not … secular meaning abounds, too.

That’s why the best meaningful monikers carry a sort of vague quality. They’re broadly inspiring. Think Journey or Haven, Promise or True. The meanings apply across faith traditions, in a wide variety of circumstances. It’s that universality that makes this name so wearable.

Promise feels hopeful. It’s not just a specific pledge to another, but also the idea of a better future to come.

Layer all that meaning on to an on-trend sound, and no surprise Promise has entered the US Top 1000. 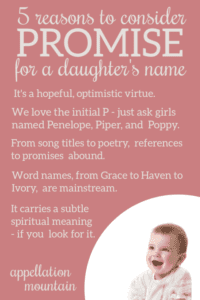