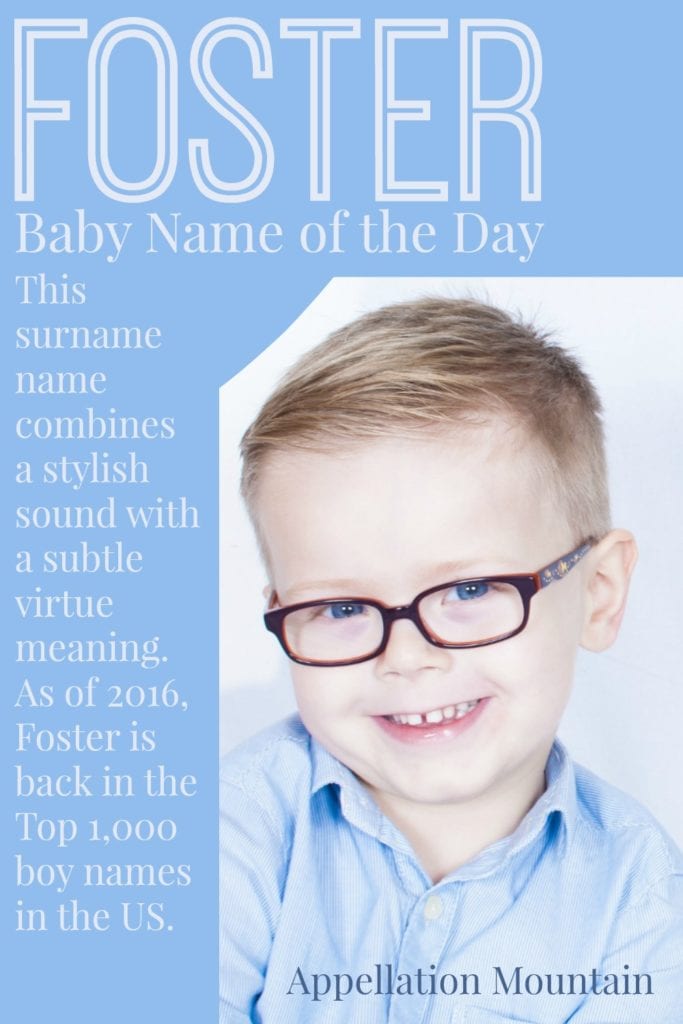 Foster fits with preppy boy names like Carter and Parker, but might count as a virtue name, too.

Our series profiling names new to the US Top 1,000 continues today.

In Old English, fostor referred to food, and more generally to support. We’ve been using the word to refer to child-rearing since the 1200s; not longer after, it took on the meaning of “to encourage,” too.

But the surname likely traces its roots to Forster, an occupational surname for someone who lived near a forest, or worked in one. A handful of other origins are possible, including sound-alike names.

Eventually, the last name might have referred to a foster child or parent, too.

That might make this a straightforward surname name. Except, that meaning – to encourage – almost puts this one in a different category.

We can “foster an atmosphere of growth” or a sense of community, or lots of other positive things.

That almost puts this name with verbs like Chase, but also with modern virtue choices like Journey and Sage. Would the Pilgrims have recognized these as reasonable given names? Probably not. But in our era of Bodhi and Sky, they can take on subtle significance.

Still, most of the children given this name probably come from a long line of Fosters. From 1880 through the 1950s, this name appears steadily in the US Top 1000. It peaked around the turn of the twentieth century.

Foster tumbled towards obscurity in the 1960s and 70s, but things started to change in the 1990s. By the beginning of the twenty-first century, the name showed signs of revival.

What explains the rediscovery?

Time deserves credit, of course – if the hundred year rule applies, then names fresh at the start of the twentieth century will feel fresh and interesting today.

We do love those -r ending names for boys. They come close to all of those -n ending surname we’ve embraced, while still feeling slightly different.

But pop culture plays a part, too.

Cartoon Network gave us Foster’s Home for Imaginary Friends in 2004. Eight year old Mac is told it’s time to give us his imaginary friend, Bloo. Bloo goes to live at the home; as long as Mac visits daily, Bloo can never be adopted by another child. Over six seasons, Mac and Bloo went on many an adventure with the rest of the not-quite-imaginary residents.

The benevolent Madame Foster and her granddaughter, Frankie, run the home, which explains its incredibly appropriate name.

In 2011, just after the series left the air, indie pop band Foster the People scored a smash hit with “Pumped Up Kicks.” The band takes its name from the surname of lead singer Mark Foster.

Then along came a television series. In 2013, we met a blended family on ABC Family’s The Fosters. The series is still going strong in its fifth season.

Foster: The Next Big Thing?

All we’re missing is a celebrity kid or two with the name. Otherwise, all the markers of a successful name are present. The sound and style are on-trend. Plenty of subtle, but positive, pop culture references bolster our familiarity with the name. And the meaning resonates for many families, a quietly virtuous choice.

All of this makes a name more wearable than Prosper, less common than Asher, but with many of the best qualities of both.

If you’re after a stands-out, fits-in choice, Foster could be for you.