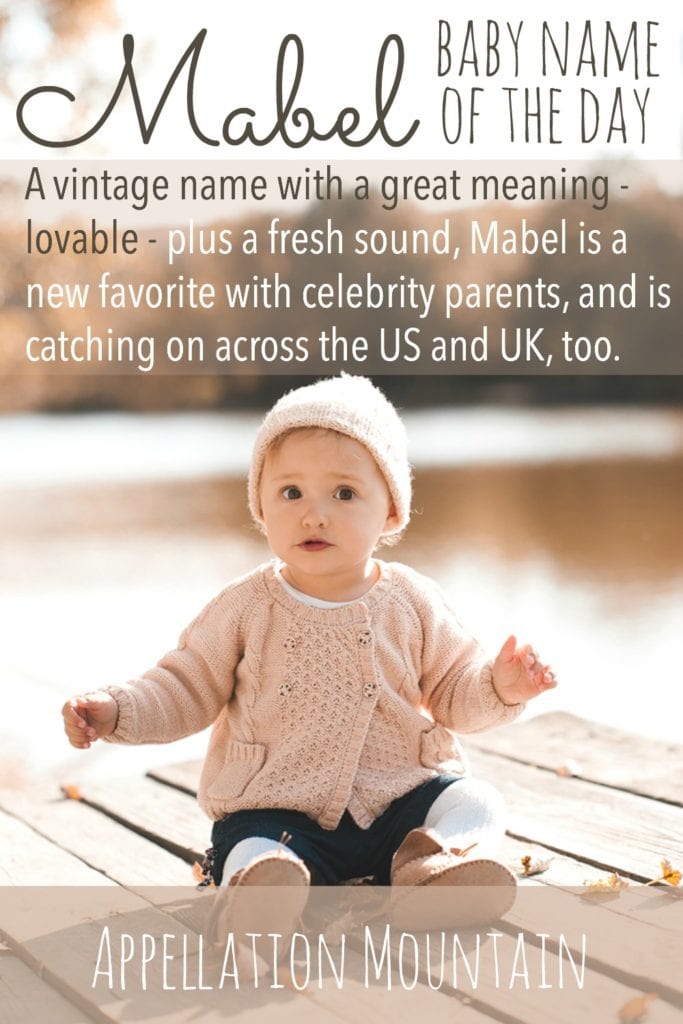 Mabel made for a jaw-dropping, unexpected choice when Paul and Jamie Buchman chose it for their daughter on Mad About You. But two decades later, Russell Brand and girlfriend Laura Gallacher picked it for their new arrival to almost universal applause.

Parents like their children’s names to have great meanings, and this one delivers. It comes from the Latin amabilis, meaning lovable.

You might also hear the meaning “my beauty,” but it’s pure folk etymology. In French, ma belle translates to my beauty or my pretty one. It’s not the source of the name.

Over the years, the name became Amabel and then dropped the A entirely. It appears in lists of Anglo-Norman names, like this one, so it definitely saw some use in the Middle Ages.

Charlotte M. Yonge penned an astonishing 160 works, most of them novels and many of them romances. 1853’s  The Heir of Redclyffe would become her first bestseller.

Yonge isn’t a household name today, but in her era she outpaced even Charles Dickens. The novel’s Mabel Kilcoran boosted the name’s use throughout the English-speaking world

By the 1960s, however, the name trended towards obscurity, leaving the US Top 1000 entirely.

Mad About You starred Paul Reiser and Helen Hunt as newlyweds Paul and Jamie Buchman. Towards the end of the series’ seven-season run, they welcomed a daughter.

Paul and Jamie struggled to find a name. After considering mainstream picks like Julia and Lily, they settled on an acronym name: Mothers Always Bring Extra Love.

When Paul and Jamie announce the name, their friends and family freeze.

And that was it.

Despite a boost from a wildly popular sitcom, the name stayed obscure, hovering under 100 girls for the next few years.

You might also think of a princess in the Dutch royal family; a dog from BBC children’s show Blue Peter; famous silent movie star Mabel Normand; or a comic strip matriarch from the long-running Motley’s Crew.

But none of those associations quite make the mainstream today.

Instead, this name’s revival is powered by sound and time. The long ‘a’ and -el ending makes Mabel a successor to Hazel. Plus we’ve been embracing Mae names for a while. And parents will always seek out the new wave of revival names. Since this name peaked way back in the 1880s, it feels quite ready for a comeback.

With high profile parents, from Chad Lowe to Bruce Willis to Russell Brand, choosing the name for their daughter, Mabel is one to watch.

What do you think of Mabel? Would you consider it for a daughter?