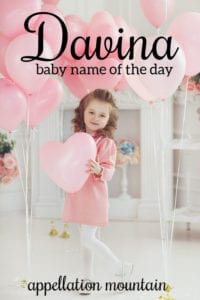 Davina serves as the feminine form of classic David, only far less popular – for now.

Our Baby Name of the Day comes from this list of girl names meaning love.

Most sites list Davina as Scottish. That’s true, though it’s the feminine form of David, which is Hebrew in origin.

Way back around the tenth century BC, David defeated Goliath and reigned as king of Israel. His descendants include Jesus himself. It’s no surprise his name has endured.

It comes from the Hebrew word meaning beloved, which is another bonus.

But despite significant Biblical roots, we often think of David as Welsh. That’s thanks to the fourth century Saint Dewi – the Welsh form of the name. David serves as patron saint of Wales. A mix of legend and truth surround his life. Some say he founded the original monastery at Glastonbury Abbey. Or maybe just dedicate a sapphire-adorned altar, one later looted by King Henry VIII.

Speaking of kings, two kings of Scotland answered to the name. The first ruled in the 1100s; the second, in the 1300s. Both were considered successful for different reasons.

Perhaps those two rulers explain why the name remained popular in Scotland, and why the clearest feminine form emerged there.

Davina seems ever so slightly British. Maybe it’s the connection to Scotland and Wales.

Or maybe it’s the name’s use in aristocratic circles. The extended royal family includes Lady Davina Lewis, daughter of the current Duke of Gloucester. Prince Richard, the current duke, is cousin to Queen Elizabeth II. Lady Davina currently appears 31st in the line of succession. She’s not a particularly public figure, though she attends events like royal weddings.

Another bearer of the name might explain the name’s image. Way back in the 1970s, Prince Charles dated Davina Sheffield. I found articles from the mid-1970s speculating that the couple would soon marry.

Of course, that’s ancient history. But looking for noteworthy bearers of the name almost always leads back to the UK. There’s television personality Davina McCall, and a character on long-running BBC series Waterloo Road, to name just two.

The recent return? That’s down to pop culture. We met Davina Chapman on A&E reality series Dog Bounty the Hunter; there’s a character by the name on Transparent; and, perhaps most influentially, it’s the name of a powerful witch on Vampire Diaries spin-off, The Originals.

There’s more to this name than a popular television series or two.

Clearly, a V in the middle spot can help push names across the style spectrum into wider use.

With a great meaning, a mix of pop culture ties, and the sound of the moment, Davina might make an appealing choice for a daughter born today.

What do you think of Davina? Would you consider it for a daughter? 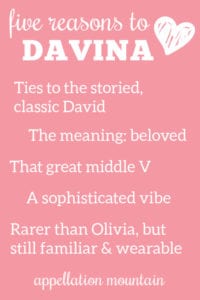