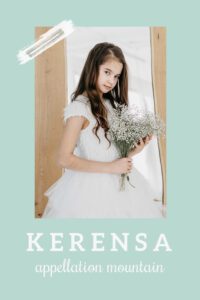 The baby name Kerensa combines an intriguing sound with an appealing meaning.

The baby name Kerensa comes from the Cornish word for love.

But Cornish names are an especially interesting bunch.

Some are traditional. Jennifer, the runaway hit from the 1970s, has deep roots.

Others are quite new, like Elowen. They reflect a newfound interest in preserving the culture. Kerensa is among this group, a name adopted in recent generations.

Located at the southernmost tip of England, Cornwall is traditionally a Celtic nation, with a language closely related to Welsh.

The language nearly died out in the 1800s, but experienced a revival early in the twentieth century. Many of the popular Cornish names date from this period.

Alternative spelling Kerenza appears in the data, too.

The baby name Kerensa first appears in US popularity data in the year 1965.

That’s thanks to a novel, The Legend of the Seventh Virgin.

Written by Victoria Holt – a pen name for Eleanor Hibbert – the 1964 novel hit the New York Times bestseller list. The story goes something like this: many years ago, seven novices in a Cornish convent struggle with their vows. Time passes, and the convent becomes a private home. Kerensa Carlee is hired as a lady’s maid, where her fate becomes intertwined with the past.

The novel’s success pushed the baby name Kerensa into sparing use in the US.

But by the end of the 1970s, the name was slipping out of use again.

As of 2020, it’s been given to fewer than five years for seven years running.

Karensa, another spelling variation, appears in the data during the 1970s, too.

Carenza seems like yet another take on the baby name Kerensa.

However, it first appears in an Occitan poem, Na Carenza al bel cors avinen. Written sometime in the twelfth or thirteenth centuries, by sisters named Alais and Yselda, the poem’s title translates to “Lady Carenza of the lovely, gracious body.”

The origins of the name Carenza remain unclear.

Young actor Kerensa Cooper has made appearances in Batwoman and Supernatural.

And the name occurs elsewhere in the real world, too.

There’s a tiny villa on the island of Tortola, available for rent on VRBO, called Kerensa. There’s a Cornish cottage near St. Ives with the same name.

It’s heard at least occasionally as a surname, too. Comedian Paul Kerensa was born in Truro, Cornwall. Though his birth surname was Young.

Efforts to preserve the Cornish heritage, culture, and language are significant and ongoing.

Even if every child born in Cornwall received a Cornish heritage name, the numbers would be small.

That leaves the baby name Kerensa a rarity, with a distinctive, romantic sound.

Easy nickname Keri helps it blend in. Except Kerensa seems like a choice meant to stand out.

If you’re looking for a name your daughter will never have to share, the baby name Kerensa could be just right for you.

What do you think of the baby name Kerensa? 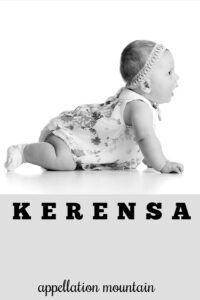