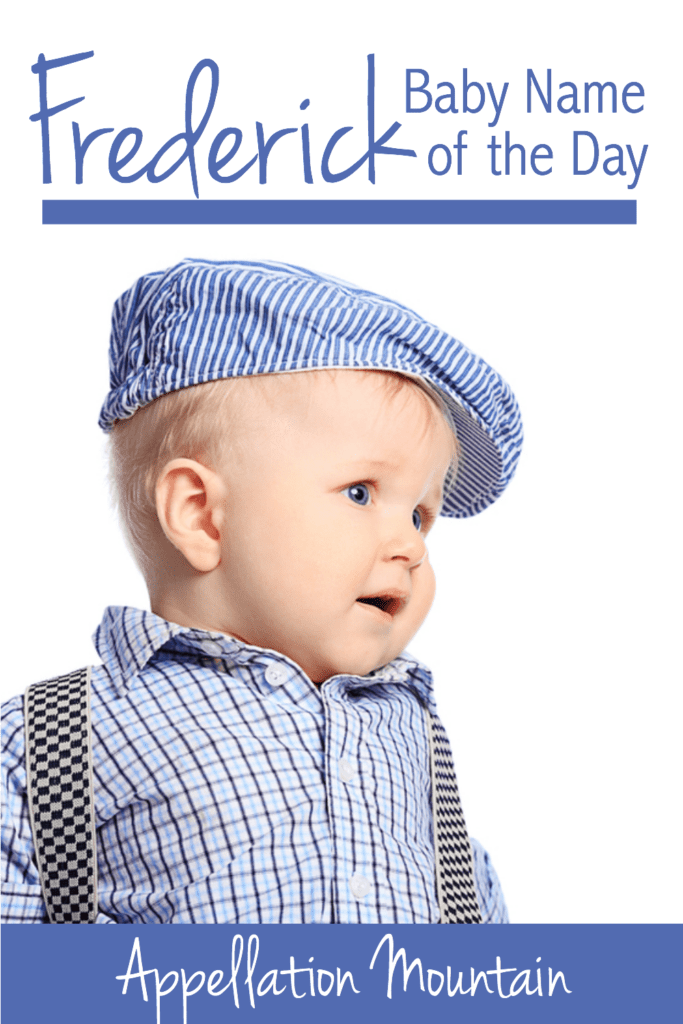 Frederick isn’t so different from favorite boy names like Alexander, Sebastian, and Theodore. But it remains relatively underused, even as Freddie flies high in the UK.

This name has a regal sound, and the meaning matches up. The Germanic elements frid – peace – and ric – ruler – combined into Fridreich and eventually Friedrich and lots of other forms. It caught on among the Germans, Austrians, and Scandinavians and you can find plenty of kings and aristocrats wearing the name.

The eighteenth century King Frederick II of Prussia – also known as the Great – is remembered as a reform-minded monarch. He read Voltaire and set out to transform Prussia both economically and administratively. He also practiced a policy of religious tolerance. While he’s not without controversy, few kings are.

In French the name is Frédéric today. The Normans brought an earlier form along on their invasion, though the name wasn’t terribly common in England until the 1700s.

Credit the German-speaking House of Hanover, cousins who inherited the throne despite being thoroughly foreign at first, with bringing the name to Britain at last.

But not every Fred is a Frederick.

One Direction’s Louis Tomlinson recently named his firstborn Freddie Reign, and Christina Ricci revealed that she also chose the name for her son. (Though Christina was mum on whether it was a nickname or not.)

In the UK, Freddie is riding the wave of nickname names, where it has recently edged into the Top Twenty.

But in the US, all Fred forms are in style limbo. Frederick was a Top 100 go-to through 1957, meaning there’s a good chance you’ve met a man with this name.

But a child? Probably not. Because while we’re reviving other nineteenth century classics like Charles and Samuel, Frederick is still neglected.

I Love Lucy’s Fred Mertz – husband to Lucy’s BFF, Ethel – made it a middle-aged name by the 1950s. And then The Flinstones made it positively prehistoric in the 1960s.

The association has stuck, at least in the US. A few years ago, Vince Vaughn played a troublesome younger brother to Santa in the movie Fred Claus.

So often has the name been used in a negative light that Fred Daniel formed the FRED Society dedicated to, as they say in their credo “preserving and upholding the honorable name of Fred for all posterity.”

I’m with The FRED Society.

That puts the name just inside the current US Top 500. You’re more likely to meet a Franklin, a Russell, or a Bruce.

Of course, that’s an opportunity, too. If you love classic baby names, but want some that your son won’t have to share, this name belongs on your shortlist. With nicknames from Freddie to Fritz to Fred to Red to maybe even Eric or Derek, it’s more wearable than you might guess.

Do you think Frederick is ready for a comeback?

This post was originally published on December 8, 2008. It was substantially revised and re-posted on May 2, 2016.