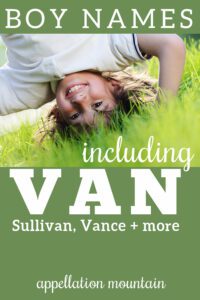 Or maybe it’s just Van itself.

It translates to of or from, so Rembrandt van Rijn means “from the Rhine.”

While Van carries no such significance, Americans might perceive it that way. Think of Blake Lively’s Serena van der Woodsen on Gossip Girl, the daughter of a long-established and very wealthy New York City family.

Van Morrison takes the sound in an edgy, rock and roll direction.

Let’s take a closer look at all of the boy names containing Van.

We love Irish surname names. Donovan also boasts ties to the British singer-songwriter – think “Mellow Yellow.” It shortens naturally to Van, and might honor a grandpa Donald or aunt Donna. It feels familiar, but not overused.

The most popular of any of the boy names containing van, Evan is a Welsh form of John. It’s appeared in the US Top 100 since 1993, a staple name for a son made cooler by the letter V.

Speaking of John, the Italian form of the name is near an all-time high in the US of #120.

And now let’s look at the Slavic form of John, a steady Top 200 choice in the US. While Ivan requires no nickname, perhaps the most famous Van started out George Ivan Morrison.

Just Van has been bestowed as a given name, at least some of the time, for years. It might substitute for current favorites like Jax, or even a brother name for Max.

Originally from an Old English word meaning marsh, Vance is the kind of name we all recognize, but seldom hear.

Cavan could be a distant cousin to Kevin, and the two names share a lot of sounds. But while Kevin is a fading favorite, Cavan is a fresh, new Irish heritage pick. Pronounce it like the county in Ireland: Gavin, with a hard C sound.

The Spanish form of Steven is nearly always listed as Esteban, with a b. But Estevan is occasionally heard, too. If boy names containing van are cool, Estevan qualifies.

This name sounds like an Evan-Alexander smoosh, but that’s not the case. Instead, Evander comes right out of ancient myth, where he’s a hero of the Trojan War.

Yet another member of the John family, Jovan is traditionally heard in Serbia, Macedonia, and the surrounding region.

Like Sylvester and Silas, this name comes from the Latin silva – wood or forest. Silas ranks among the most stylish boys’ names of our moment, while Sylvester waits in style limbo. As for Sylvan, it’s just downright rare.

If Xander works, why not Vander? It could be a contraction of any of those Dutch van der surnames; or maybe it’s just a cool, modern sound.

What are your favorite boy names containing VAN?