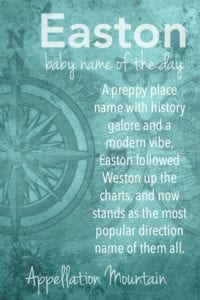 Easton appears in the current US Top 100 – but thirty years ago, it was all but unknown.

Our Baby Name of the Day comes from this list of substitutes for Logan.

Easton: On the Map

There’s no mystery to this name’s meaning. It started out as a surname for someone living in an eastern town – a settlement east of somewhere else. It’s quite common, and there may be other explanations for the name’s origins. But when we hear the name, the direction immediately comes to mind.

I counted nearly two dozen places in the UK, and nearly as many in the US.

Odds are good that nearly every child called Easton lives within a few hours’ drive of a town with the same name.

Nearly any English-Scottish-Irish surname appears in use in small numbers as a given name. That’s true for Easton, too.

So what took it from a sometimes-heard choice to a Top 100 favorite?

Andrew McCarthy played the role of Clay Easton in the movie adaptation.

Except there was a tiny uptick in the name’s use a few years earlier. Credit might go to pop singer Sheena Easton. Her breakthrough hit, “9 to 5” came in 1981.

Let’s say that the name started to circulate in the 1980s – as a middle and a last, which paved the way for parents to consider it as a first.

The 1990s jump-started the two-syllable, ends-with-n trend that continues to define how we name our sons. Traditional Ethan ranked in the Top 100, and continued to climb towards the Top Ten. With similar sounds, it is easy to imagine parents considering Ethan jumping over to this just slightly different name.

Plenty of other two-syllable, n-ending favorites went mainstream during the 1990s. Logan and Colton caught on. Grayson and Aidan were climbing fast. So it’s not a surprise that parents slowly discovered this choice, too.

Every direction carries a certain set of associations. East brings to mind a few things: a sort of preppy, East Coast sophistication, the privilege of New York and Boston and Washington DC.

But there’s also Eastern Europe, including many former Soviet bloc countries that were enjoying newfound freedom in the 1980s and 90s.

And then there’s East Asia, once called the Far East, as well as the Middle East and other terms. Because of that, the word can bring to mind dozens of concepts associated with Asia, from religion to cuisine to history and language.

Today, this name feels like a modern traditional. It’s got history aplenty, and feels like a solid choice for a son. But there’s no denying that this name is a newcomer.

Pop culture references abound, from young country singer Easton Corbin to celebrity babies. Jenna and Bodhi Elfman gave the name to a son, while Elisabeth Rohm has a daughter by the name.

If you’re after a modern name that doesn’t feel trendy or fleeting, Easton could be one to consider.

What do you think of Easton – and direction names in general? Would you consider any of them for a child?