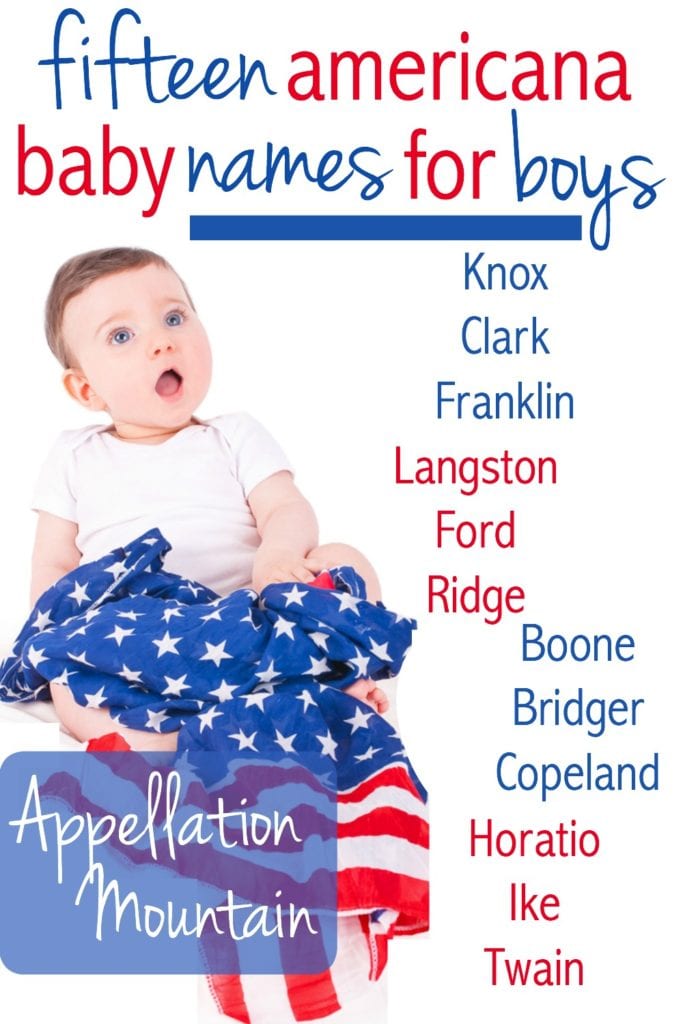 Americana baby names for boys come painted in the colors of red, white, and blue. They’re patriotic, but they’re subtle, too. Gone are the days when people named their sons George Washington Jones or Abraham Lincoln Smith.

Today, Americana baby names for boys bring to mind a mix of rugged individualism and the American West of days gone by.

Now here’s the tricky part: the United States is sprawling and diverse. You could argue that some of the most American names are Liam and Angel – imports that remind us of our roots. Or maybe names like Jaxon and Jace, creations that point to our ability to reinvent ourselves.

But we’re not talking about American names. We’re focused on Americana – names that bring to mind the specific history and culture of the United States. And while I dipped a toe into the early twentieth century, most of these are pre-1900.

With that in my mind, here are my picks for the fifteen best Americana baby names for boys.

Jackson – This surname name is popular and presidential, but that’s not enough to make Americana names for boys. (Carter, you’ll note, is not on the list.) And Jackson remains controversial – he won the War of 1812, but caused the Trail of Tears with forced relocations of thousands of Native Americans. Instead, Jackson feels red, white, and blue because of the many places by the name. Johnny and June Carter Cash recorded “Jackson” in 1967. Jackson makes the map in at least 22 states. While the song originally referred to no place in particular, Johnny Cash assumed it was Jackson, Tennessee, and that assumption has stuck. It also feels so quintessentially Americana thanks to Jackson Hole, Wyoming, home to Grand Teton National Park, and quite close to Yellowstone National Park.

Levi – Biblical boy Levi appears in the Old and New Testaments, but that modern ‘v’ sound, feels right at home in the twenty-first century. Levi makes the list of Americana baby names for boys thanks to one very successful bearer of the name: Levi Strauss. The German-born Strauss founded his company in San Francisco in the year 1853. Denim work pants came along in the 1870s. A century later, they had become the default American uniform. While designer denim might dominate sales floors, the original blue jeans are still called Levi’s, and carry with them a red, white, and blue authenticity that makes this Top 50 name pure Americana.

Lincoln – Abraham Lincoln served as president way back in the 1860s, but more baby boys are named Lincoln today than ever before. Maybe that’s because his legacy remains relevant in 2016. Lincoln preserved the Union, abolished slavery, and is widely admired decades later. Or maybe it’s just the on-trend sound of Lincoln, a successor to Logan and Landon. Let’s hope it’s a little of both. Illinois is the Land of Lincoln – as in Abe – and the capital of Nebraska is named for him, too. It’s with the Americana baby names for boys through and through.

Knox – Scottish surname Knox rose from obscurity to the Top 1000, thanks to the Jolie-Pitt’s youngest son, born in 2008. Today the name ranks #219. The name came from dad Brad’s family tree, but it’s also associated with Fort Knox. The United States Bullion Depository – a highly secure vault packed with much of the US government’s gold reserves – makes its home at Fort Knox, and makes the army post famous. Knox likely owes its success to other factors. There’s a Knox in Dead Poet’s Society, and we love those x-ending names for boys.

Clark – At number #377, Clark started out as an occupational surname name for a clerk. William Clark blazed trails with Meriwether Lewis, claiming the Pacific Northwest for the United States. Once associated with Hollywood leading man Clark Gable, the name was in style limbo for decades. But now, it’s on the rise, climbing over 300 places since 2010. Another factor contributing to Clark’s Americana baby names for boys vibe? The Man of Steel himself, Superman, also known as Clark Kent.

Franklin – Franklin is a turtle, in children’s books and animated television. Think of Founding Father Benjamin Franklin instead to transform this name from quirky cartoon pick to Americana appellation. Franklin ranks #435 at the moment, bolstered by our affection for ends-in-n surname names, as well as the rise of all things Francis.

Boone – Boone’s bold and interesting sound makes this name a successor to Jude or Beau. But it makes this list thanks to Daniel Boone, American frontiersman and folk hero. While his exploits made him legendary during his lifetime, Daniel’s story has since been embellished. Even during his lifetime, he noted that his adventures were much exaggerated. From the poems of Byron to 1960s television, it’s tough to separate the man from the legend. That makes it perfect for the Americana baby names for boys list. Boone ranks #669.

Langston – Langston Hughes revolutionized poetry during the Harlem Renaissance. Like Franklin, this name succeeds on sound. But the meaning matters, too. From “I, too, sing America” to his images of “a dream deferred,” Langton’s powerful words linger. The name currently stands at #685, at least partially inspired by the poet.

Ford – Henry Ford may be a problematic figure, known for his manufacturing genius – and his personal biases. But Ford as a brand feels vintage and Americana in a good way – just like Levi. The name returned to the US Top 1000 in 2014, but some credit goes to Owen Wilson’s son Ford, born in 2011. Ford stands at #635.

Ridge – To some, Ridge is all soap opera, thanks to a long-running character on The Bold and the Beautiful. But lately, Ridge is on the rise thanks to its status as a rugged nature name that’s new and different, but not too different. The name ranked #702 in 2018. The majestic Blue Ridge Mountains – immortalized in many a song, included John Denver’s “Country Roads” – put this name on the list of Americana baby names for boys.

Bridger – Bridger shares sounds with Ridge, but this one pairs best with Boone. Like Daniel Boone, Jim Bridger headed West, leaving Virginia for the mountains. Separating their real life biographies from the legends can be tough in both cases. At least a dozen places bear Jim’s name, another factor making Bridger one of the Americana baby names for boys. Bridger has yet to crack the US Top 1000, but is well used in the Mountain West. Bridger stands at #921.

Americana Baby Names for Boys: Beyond the Top 1000

Copeland – Tom Arnold put Copeland on my radar when he welcomed son Jax Copeland in 2013. Was it a nod to the Dean of American Composers, Aaron Copland? Given the different spelling, I doubt it. Copeland – with the ‘e’ – seems to be the more common spelling. But either Copeland or Copland makes a great Americana choice. The composers’ works include “Fanfare for the Common Man,” as well as “Appalachian Spring” and “Billy the Kid.” Known as a quintessentially American composer, his surname makes a great pick for a son.

Horatio – The Massachusetts author Horatio Alger penned many a tale of poor boys who pulled themselves up by their bootstraps. Born into privilege and educated at Harvard, Horatio wrote modern Cinderella stories for boys. Good triumphs over evil, and all ends well. Today “Horatio Alger” refers to any such story, regardless of authorship. Battle of Trafalgar hero Horatio Nelson makes this name British, but I think it belongs with Americana baby names for boys, too.

Ike – Dwight Eisenhower was better known by this nickname, and by campaign slogan, “I Like Ike.” The World War II general and NATO won inaugurated as the 34th President of the United States in 1951. That’s relatively recent compared to Bridger or Horatio, but it feels far enough in the past to spark nostalgia. Yet Ike also shaped society as we know it today. He used executive powers to enforce Civil Rights rulings, in both the military and Arkansas, following the Brown v. the Board of Education decision. Casual and cool, Ike is also nicely Americana.

Twain – Mark Twain was born Samuel Clemens, taking his name from a phrase used to measure depth on the Mississippi River. “Mark twain” meant a depth of two fathoms. The writer’s works remain widely read and characters like Huck Finn and Tom Sawyer are deeply associated with our ideas about nineteenth century America. Because twain comes from an Old English word meaning two, it might be a fitting name for a second-born son.

What are your favorite Americana baby names for boys? Are there any you would add? 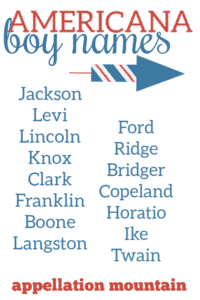