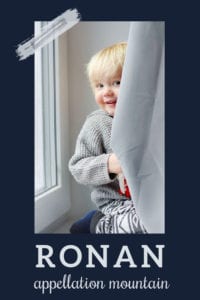 The baby name Ronan belongs to a saint and a centaur. And it’s a fast-rising Irish import with plenty of charm.

It’s our Baby Name of the Day.

We name our children Fox and Wren and Bear. And names like Leo, Caleb, and Paloma refer to animals. The baby name Ronan falls in the latter category.

Both the Atlantic grey seal and the Harbour seal live on the coast of Ireland. Rón is the Irish for seal; adding the diminutive “an” turns the name into “little seal.”

If you know your mermaids, you might be thinking of selkies. In Irish and Scottish legends, they’re mermaid-like creatures, but instead of being part-fish, they’re human on land and seals in the water. An old folktale tells of a selkie who married a fisherman. Their children were ronans – little seals.

The historical record gives us a saint by the name, sometime in the sixth century.

It’s said the future Saint Ronan was well-educated. He served as a bishop, but chose to travel to Brittany as a missionary. The place he settled eventually became known as Locronan, in his honor. During his life, he attracted followers, and legends about his life abound.

The village is stunningly picturesque – it’s part of Les Plus Beaux Villages de France, an association formed to raise awareness of France’s many small, but lovely, towns. If you’ve seen the 2004 romance A Very Long Engagement, then you’ve spied Locronan.

Despite the long-standing connection between the saint and the village, the baby name Ronan remains rare in France.

However, Ronans are plentiful in Ireland. Until recently, that’s almost the only place you’d hear it.

During the seventh century, at least one – and possibly two – kings of Leinster answered to the name.

And more saints appear in the record, too.

In 1823, Sir Walter Scott published Saint Ronan’s Well, a novel set in a fashionable spa on the Scottish border. It’s still there today.

Journalist Ronan Farrow is likely the best known at the moment. The son of Woody Allen and Mia Farrow, he was born Satchel Ronan, but has used his middle name in his adult life.

And then there are the fictional figures:

In 2012, Taylor Swift recorded a single for charity titled “Ronan.” It was inspired by a young boy by the name who died of neuroblastoma. It’s a heart-rending song.

The baby name Ronan has been a Top 100 choice in Ireland and Northern Ireland for years, and it’s familiar elsewhere in the English-speaking world.

American parents have embraced the name more recently. It debuted in the US Top 1000 in 2001.

It rose with other two-syllable, ends-with-n favorites, most notably Aiden. But it also fits right in with Ryan and lots of other modern traditionals we love for our sons.

We’ve traded Brian for Kevin, Sean and Ryan for Connor and Aiden. And lately, it’s a new wave of Irish boy names that have been discovered in the US. The baby name Ronan fits in this category, but so do Liam and Finn.

Ronan fits with another category of names – the equally Irish Rowan, the Italian-inspired Roman, and Japanese warrior name Ronin.

Between the vibrant Ro sound and our love of Irish boy names, it’s easy to imagine Ronan continuing to gain in use.

All of this makes the baby name Ronan a great fit for parents after something authentically Irish, steeped in history, but accessible to an American audience and not too very popular – yet.

What do you think of the baby name Ronan? Would you consider it for a son? 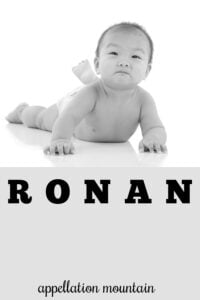 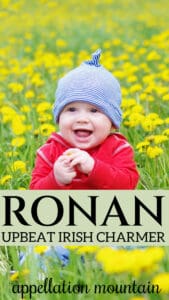