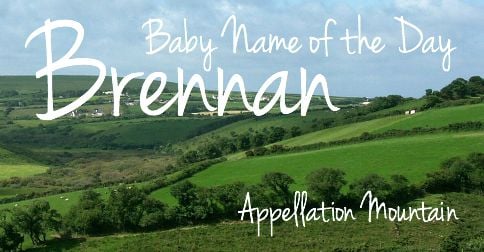 Brandon? No. Brendan? Not quite.

Today’s Baby Name of the Day is the just slightly different Brennan. Thanks to Kenneth for the suggestion.

Brennan: In the Club Brennan is their quiet cousin, a name that has followed the others up the popularity charts, peaking at #242 in 2009.

The name has at least two possible origins. It could come from a given name derived from the Irish word for tear drop, in which case the name means something like sorrow.

Or it might be related to the given name Branan, meaning raven. Brannan has seem some sparing use as a given name, too. Most of the notables have worn this name as a surname. It’s a wide and varied group.

Back in 1877, Irish-Australian inventor Louis Brennan designed a torpedo that is widely considered the world’s first functional guided missile. (Other designs predated it, but his worked.)

New Orleans’ world-famous French Quarter is home to Brennan’s. Owen Brennan opened the restaurant in 1946. Though the family no longer owns it, the restaurant is still in operation. It’s famous for many things, including the creation of Bananas Foster, back in 1951.

Brennan: By the Numbers 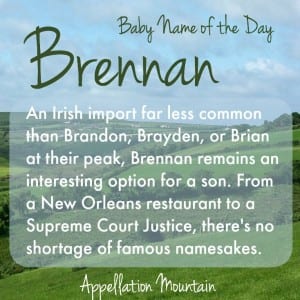 The question is this: is Brennan a fresher alternative to traditional Irish imports like Brandon and Brendan? Or do all of the names in this category feel a little tired?

The numbers demonstrate that all three names are falling:

So while all of the names have fallen, Brennan was never nearly as common as the others

That’s why I think this name remains just a little bit different, and far more wearable than many an Irish name for boys. Brian is edging into grandpa territory, and Brayden – pick your spelling – is fading with the rest of the -aydens.

Brennan feels relatively underused, distinctively Irish, and just a little bit different. It could be a great stands-out/fits-in name for a son.

What do you think of Brennan? Does it feel fresh and interesting, or too much like those other Irish names for boys?