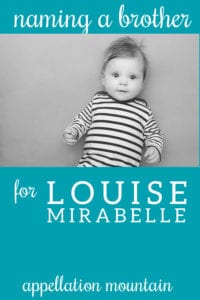 We named our daughter Louise Mirabelle, and we call her Lulu and Lou and Lucy Belle. It took forever to agree on her name, but we’re really happy with it.

Now we’re expecting a son in April, and we’re feeling just as stuck as we were with Louise’s name.

JAMES – It’s my husband’s middle name, and my grandfather’s name. But it is too boring compared to Louise? And will people call him Jimmy? (We’d like to use James.)

ANDREW – The only other name we both mostly agree on, but again – I don’t like Andy and my husband really, really doesn’t want to call him Drew. So I feel like this one is maybe out?

ELLIOT/T – What I would name this baby if my husband didn’t have an opinion. I love it! But he just doesn’t think it sounds like a name. I like the idea of calling him Eli. Elijah won’t work because our last name ends with an -a, and we agreed to no a-ending names with Louise. (And while I say that Louisa Ay@l@ would have been fine, I can see that Elijah Ay@l@ seems like too much.)

Louise’s name really clicked when we found Mirabelle on your site, so I’m wondering if you have another great idea for us?

It’s interesting … conventional wisdom tells us to figure out our child’s first name first, and only fill in the middle blank afterward.

Except I hear plenty of people who have the same experience you’ve shared. It’s completing your child’s full name – as with Louise Mirabelle – that makes the first name click.

That said, let’s start by looking at your first name options.

First, Elliot is a great name! And yet … if your husband feels strongly against it, there’s not much point keeping it on the list, right?

Is he open to Eli as your son’s full name? If so, that might be an option. I’d also suggest considering other names like Elliot – Everett, Beckett, Emmett, Bennett, and Wyatt.

Assuming your husband won’t be swayed, that leaves James and Andrew.

When it comes to nicknames, my rule of thumb is this: if you actively dislike a potential nickname, then it’s best to avoid the formal name. Andrew could go his whole lifetime and never be Andy even once. Or he could come home from kindergarten and announce that he’s Andy now.

So if it’s a case of active dislike of the nickname – because of a strong negative association, or maybe because it’s just not your style – then avoiding the formal name makes sense.

But if it’s a question of preference?

Then don’t sweat it.

I know at least one baby James – never Jamie, Jimmy, or Jim – and a grown-up just James, too. For this generation, nicknames tend to be much less automatic. The same is true for Andrew.

From your description, it seems like James is the better choice. It’s classic – which means your son will share it with many other people. But it’s far from boring! It’s a timeless choice that will wear well over a  lifetime.

Plus, you can find a great middle name.

Mirabelle means wonderful, so let’s look at some possible middles for James with great meanings.

ASHER – Asher means happy. (And if this meaning appeals, Felix and Noam share it, too!)

BENEDICT – From a Latin name meaning blessed, Benedict has the grandeur as Mirabelle.

THADDEUS – Thaddeus means heart, which feels like a powerful meaning for a name.

TRUETT – Strictly speaking, this surname name comes from a place in England. But it suggests the words true and truth, which make this more of a virtue name.

A BROTHER FOR LOUISE MIRABELLE

My favorite combination is James Lionel. Lions are brave and noble, so the meaning feels inspirational. But like Mirabelle, Lionel reads more like an old-school name and less like a word or specifically virtuous choice.

Though if you’d like something a little more current, James Asher is very handsome. And Asher’s meaning? It’s perfection.

Readers, what would you name a brother for Louise Mirabelle?