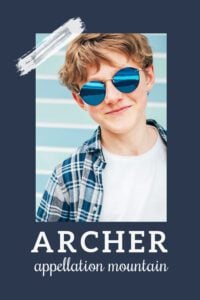 The baby name Archer transitioned from seldom-heard rarity to mainstream favorite, all in the last decade.

Thanks to Rachel for suggesting our Baby Name of the Day.

The baby name Archer comes from the Latin arcus – bow, via the Old French archier, meaning one who hunted or served in the military armed with a bow and arrows.

William the Conqueror brought archers with him from France in 1066.

King Harold’s army had a few, too, but the Saxons were outmatched.

Prior to the Norman conquest, Englishmen were known as bowmen. That changed during the eleventh century. The new Anglo-French term was archer, replacing the native English word bowman.

It’s possible a bowmaker might’ve adopted the name, too.

Both Bowman and Archer remain in use as surnames, but when it comes to the occupation and the sport? The Norman French word has endured, and there have been archers ever since.

That makes this an occupational name. But like Carter and Miller, we no long associate it with a specific profession.

After all, archery as a military weapon of choice has faded.

Today the term suggests someone who shoots for recreation – probably at paper targets – rather than a soldier.

The baby name Archer appeared just a few times in the US popularity rankings during the nineteenth century.

The name would remain outside the rankings for well over a century.

Most years, a handful of newborn boys received the baby name Archer. But so few that it probably never crossed most parents’ minds. Chances are it was used mostly by Archer families, eager to keep the surname in use.

The baby name Archer might’ve fallen out of use as a given name during the twentieth century, but it endured as a surname.

And that put it in the company of an entire category of names parents discovered late in the twentieth century. Tyler and Hunter were among the early favorites – occupational surnames ending with R.

Other names, like Connor and Xavier, shared the same sound and rose around the same time.

While our favorite R-ending choices have changed over the years, plenty of options remain quite stylish today. Walker and Parker, Jasper, Asher, Cooper, and River all count among stylish baby names of the moment.

Other Arch- names compete with Archer for attention.

The Germanic Erchambold came from ercan – genuine – and bald – bold. That’s quite the meaning! But the Greek archos means master. Put them together, and Erchambold becomes Archibald – eventually.

That said, Archibald nickname Archie now outpaces the formal name. It’s a Top 1000 favorite and rising in the US and elsewhere, chosen by celebrities and royals.

While all three names share a first syllable, Archibald, Archer, and Archie are connected only by sound.

One of the appealing things about the baby name Archer is that it combines the rustic and the refined so gracefully.

Edith Wharton gave the name to Newland Archer – usually referred to by his surname – in her Pulitzer-winning 1920 novel, Age of Innocence. He’s a Gilded Age New Yorker, rich with privilege, when he falls in love. It’s an enduring tale, one remade for the big screen in 1934 and 1993. The novel remains widely read.

If that’s the refined version of Archer, then BBC Radio 4 takes it in a different direction.

It’s still going strong today, the world’s longest-running drama. Initially meant to be edutainment, mixing practical tips for farmers in with tales of small-town life, it’s grown beyond that. The show deals with both everyday problems and current events.

The show lends the name a sort of practical, down-to-earth vibe. And while The Archers isn’t well-known outside of the UK, it’s worth noting that the name is rising in use there, too.

No question, though – the baby name Archer’s biggest boost came from an animated adult sitcom on FX.

In 2009, the world met Sterling Archer, a tale of a super-spy in a dysfunctional intelligence agency. It’s a little bit James Bond, a little bit The Office. Or maybe Mad Men.

The thirteenth season premiered in 2022, so Archer is still going strong.

Along the way, other fictional figures have helped boost the baby name Archer.

From 2006 to 2009, the BBC’s Robin Hood retold the beloved tale. While it’s mostly faithful to the traditional story, it adds a half-brother for Robin. His name? Archer.

Star Trek: Enterprise ran from 2001 through 2005, a sort of prequel to later installments in the franchise. Scott Bakula played the main character, Captain Jonathan Archer.

MEANING of the NAME ARCHER

Still, there’s another reason for the name’s appeal.

While Archer literally means “bowman,” it is so tied to the imagery of arrows that it takes on a very different sense.

It’s almost a virtue name of sorts, since it suggests hitting a target.

And arches have been richly symbolic for millennia, symbolizing transition and change. They’re often associated with victory – think of Paris’ Arc de Triomphe or London’s Marble Arch. Triumphal arches are found all over the world, dating back to the Roman Empire.

Others are built as memorial arches. In New York City’s Washington Square, the arch commemorates the centennial of George Washington’s inauguration as president in 1789. And Mexico City’s Monumento a la Revolución is both a mausoleum and a monument to those who served in the Mexican Revolution during the early twentieth century.

While we think of Artemis as the skilled hunter, her twin brother was also a god of archery.

At least a half dozen of his titles spoke to his skill with a bow and arrow. Apollo Hecebolus meant “far-shooting,” to list just one.

And so famous archers across history and across fiction might also inform parents’ choices. There’s legendary Robin Hood, mentioned above. Lord of the Rings gave us Legolas. And the Marvel universe includes Hawkeye.

Swiss folk hero William Tell was a master of the crossbow.

So was Daryl Dixon in The Walking Dead.

And that’s just a start.

It feels like a traditional name that we’ve long overlooked. It shares easy nickname Archie and Archibald’s historic sound.

But truly, Archer has never been more popular than it is today.

Overall, the baby name Archer makes for a sharp and stylish choice.

It’s familiar, but not chart-topping.

And while it’s thoroughly modern, we think of it as rooted, thanks to Archibald.

Nickname Archie is darling, but this name requires no shortening.

The name’s potential symbolism and meaning is richly appealing.

And if the Archer surname appears on your family tree? Then it’s even more perfect. (Or even Bowman. Twentieth century character actor Ralph Bowman forged a successful career in Hollywood as John Archer. (Though he won the name in a contest.)

If you’re crushed that Hunter and Carter are so very popular, then Archer might be a great alternative. It’s sharp and stylish, a fits-in name that stands-out with an edge.

What do you think of the baby name Archer? 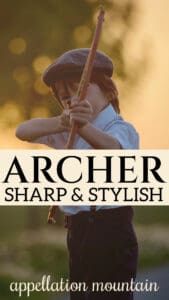 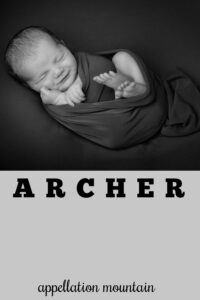