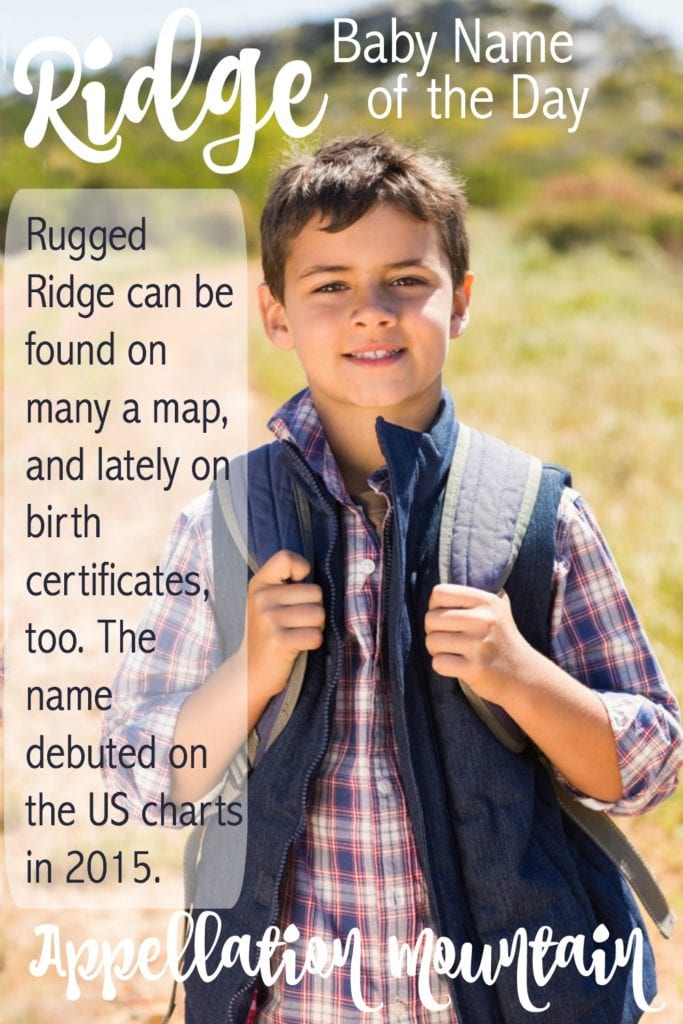 Ridge is a rugged, outdoorsy name with a surname vibe. No surprise it’s on the rise in 2016.

We’re featuring Returns and Debuts this week, beginning with this handsome Baby Name of the Day.

Ridge: Living on the Edge

Time for a science lesson. You might think of them as hills or even mountains, but a ridge is a specific type of geological feature. Typically found at the top of a mountain, the word refers to a long stretch of high land.

The fun part? The term comes from an Old English word meaning back, as in a man’s back, or an animal’s back: hrycg.

It also refers to a bony part of our skulls, starting right above our eyebrows. Today, the word can describe almost anything long and narrow.

Ridge became a surname name for anyone who lived near one, and while it’s not common, there have been a few notable bearers.

Nineteenth century novelist John Rollin Ridge is considered the first Native American novelist. A member of the Cherokee Nation, he spent much of his adult life in California working as a newspaper editor. 1854’s The Life and Adventures of Joaquin Murieta was his only novel. John published it under his tribal name, Yellow Bird.

A minor Marvel Comics character answers to the name, too.

It’s easy to imagine this name on a soap opera, along with Stone and Cliff. Sure enough, Ridge Forrester was part of the original cast of The Bold and the Beautiful when it debuted in 1987. Twenty-five years later, the character is still at the heart of the series. He’s currently married to the love of his life, Brooke – how’s that for nature name overload?

Around 100 boys a year received the name from the 1990s onward. Young actor Ridge Canipe was born in 1994. Among other roles, he played young Johnny Cash in Walk the Line.

It’s not clear what prompted the rise in this name’s use. It does fit with a handful of trends:

This name appears on plenty of maps, but perhaps the best known in the US is the Blue Ridge Mountains. Part of the Appalachians, and home to the Great Smoky Mountains and Shenandoah National Parks, the Mountains are widely known. They’re mentioned in John Denver’s hit, “Take Me Home, Country Roads,” as well as songs by the Grateful Dead, the Carter Family, and at least a dozen others. Clemson University’s alma mater kicks off with a reference to them, since the university sits at the foot of the mountains.

If you prefer a modern name for a boy, with a rugged, outdoorsy vibe, consider Ridge. While it’s rarely heard as a given name, it has a distinctive sound and a straightforward spelling, making it easy to wear.

What do you think of Ridge as a boy’s name? Do you think it will catch on?