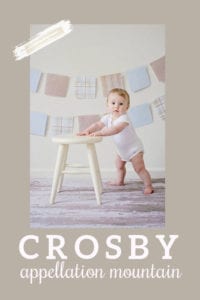 The baby name Crosby feels athletic, artistic, and upbeat. But no one is using this name – yet.

Thanks to Leitia for suggesting our Baby Name of the Day.

The boys’ Top 100 reads like a phone book: Carter and Jackson, Hunter and Chase. Y-enders, like Brody, Brady, and Grady feel familiar, too.

As a surname, Crosby claims centuries of usage. It appears mainly in Scotland and northern England, places with heavy Scandinavian influence. The first syllable comes from Old Norse – kross, ultimately from the Latin crux, forerunner of the English word cross.

The familiar byr ending referred to any settlement or enclosure.

If you lived near a stone cross marking for a settlement or a road, Crosby might emerge as a logical surname: John Crosby was the Crosby who lived near the cross.

But none of the historical figures can compete with a trio of more recent Crosbys.

Born in 1903, Harry Crosby adopted the nickname Bing after a comic strip in his town’s newspaper. Bing started performed while still a student in Spokane, Washington. From Spokane to Los Angeles, and then the world, Bing quickly became one of the most successful recording artists of the twentieth century.

His heyday was the 1930s through 1950s. Bing won a Best Actor Academy Award in 1944 for Going My Way, and several of his songs, including the enduring “White Christmas” also earned Oscars and Grammys. But that wasn’t the end of his career. He was also a successful innovator, working to pioneer the idea of recording programming for radio.

But for our moment, the most famous Crosby takes the name in a different direction. Canada’s Sidney Crosby currently plays for the Pittsburgh Penguins. When he joined the NHL as a teenager, they called him “The Next One,” in homage to Wayne Gretzky – “The Great One.”

In 2009, he became the youngest captain to lead an NHL team to win the Stanley Cup. A year later, he scored the game winning goal to take home Olympic goal for Canada in the Vancouver games. He captained the Canadian team again in 2014, when they defended their Olympic title.

Bing and David and Sid aside, the baby name Crosby’s biggest boost came from television. Dax Shepard played Zeek and Camille’s youngest son on Parenthood from 2010 through 2015.

Parenthood detailed the lives of the extended Braverman family, living in California. Crosby and his girlfriend-then-wife, plus their kids, featured across the series’ five seasons.

That makes the name nicely familiar, but not terribly popular.

While it’s used in small numbers for girls, the Parenthood character seems to have cemented the baby name Crosby as masculine.

If you’re looking for a substitute for popular surname names like Hudson and Nolan, Crosby shares much of the same style and spirit. But the name’s sound remains distinctive and different, an appealing choice that feels rarer than you might expect.

Would you consider the baby name Crosby?

Image by Nathan Legakis from Pixabay