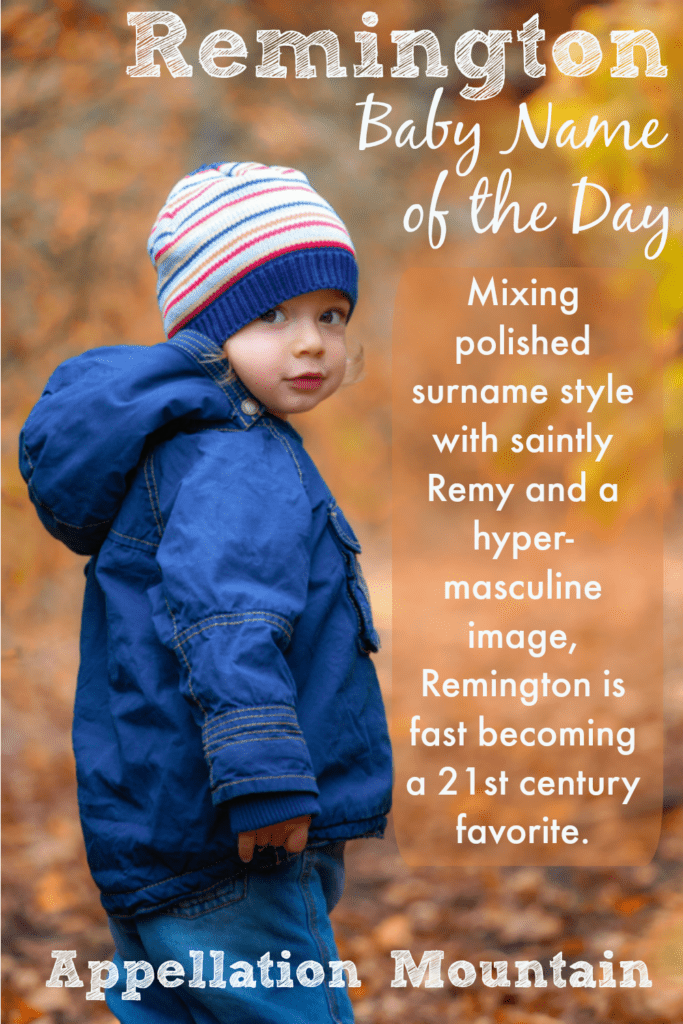 Remington continues to rise, and Kelly Clarkson’s new son can only help boost the name farther.

Like many a surname, this one comes from a place. In Old English, riming meant boundary stream, and that familiar -ton ending refers to a settlement. In this case, the settlement sat near a stream that created a natural boundary.

But that’s not what the name means today, thanks to a famous bearer.

Eliphalet Remington was born in Connecticut way back in 1793. He designed the rifle that bears his name, and founded a company to produce them. It wasn’t a stretch for Eliphalet – his dad trained him as a blacksmith, and he inherited the family’s forge.

By 1840, Eliphalet’s three sons had joined the business. Besides guns, they made bicycles and typewriters and all sorts of things over the years. But firearms have always been, and remain, the core of their business. The company is celebrating its 200th anniversary in 2016, making it the oldest gunmaker in the US.

Parents have embraced names inspired by weapons in recent years, but Remington ran ahead of the curve.

Credit goes to 1980s television series Remington Steele. Struggling private investigator Laura Holt realized that many clients balked at the idea of a woman PI – no matter how capable. She creates Steele as her fictional boss.

Then a con man, played by Pierce Brosnan, waltzes in and claims to be Mr. Steele himself.

The show ran for a successful five seasons, and parents warmed up to the name. It debuted in the US Top 1000 in 1983, but slid the following year, and briefly left the rankings.

But then Pierce Brosnan’s career took off and Steele entered re-runs. By 1989, the name had returned to the fringes of the rankings, and would stay there for two decades.

Remington: By the Numbers

It ranks #622 on the girls’ US popularity charts, too.

What explains the 2009 leap? Maybe it’s because the name appears on the map. Or perhaps our affection for longer surname names for boys, like Harrison and Sullivan, explains the rise.

Then again, it might be all about the nickname.

Disney-Pixar’s 2007 hit Ratatouille introduced Americans to Remy, a French saint’s name. The animated rat – and the saint whose name he shared – was male. But Remy rhymes with Emmie, and fits right in with all of those Em- names, too.

It’s not just about the rat. Hip hop influences include female rapper Remy Ma and rap group Remy Boyz. It also appears as an X-Men character name, along with several other fictional characters of recent years. Remi also ranks in the US Top 1000, though only for girls.

It seems that the names combined their appeal to climb dramatically.

Clarkson’s kids tend to share the spotlight. She’s penned a book called River Rose and the Magical Lullaby and often shares updates. It’s enough to keep Remington in the spotlight, and give the name a little extra boost.

Not that it needs it, though. This name seems headed straight up the charts already.

What do you think of Remington? Do you like it better for a boy or a girl?